Monument against War and Fascism in VIenna

THE HISTORY OF THE MONUMENT AGAINST WAR AND FASCISM IN VIENNA

Historical reminding of the period of Austrian history between 1938 and 1945 within the Third Reich is to be not so familiar site in Vienna, located just 100 meters from the famous Vienna State Opera (Staatsoper) and next to the Albertina art gallery. The whole world knows it as Monument against Fascism in Vienna (Mahnmal Gegen Krieg und Faschismus).

It took almost fifty years for Austrian authorities to initiate a memorial to the civil victims of the Second World War in the very heart of Vienna. The creative call for a new monument was announced only in 1988. Albertinaplatz square, near Vienna State Opera, was determined as a site for the future ‘Monument against Fascism’. The place was infamous for Philipphof – a former family dwelling, destroyed during the war. On March 12, 1945 hundreds of its inhabitants were buried alive under the construction after an allied air bombing strike. The remaining ruins of the Philipphod residential house were eliminated after the War in 1947 to reveal a part of the future open square. The monument against Fascism in Vienna was ceremonially unveiled on November 24, 1988. This Vienna War memorial consists of a separate thematic composition with its own meaning and respect. 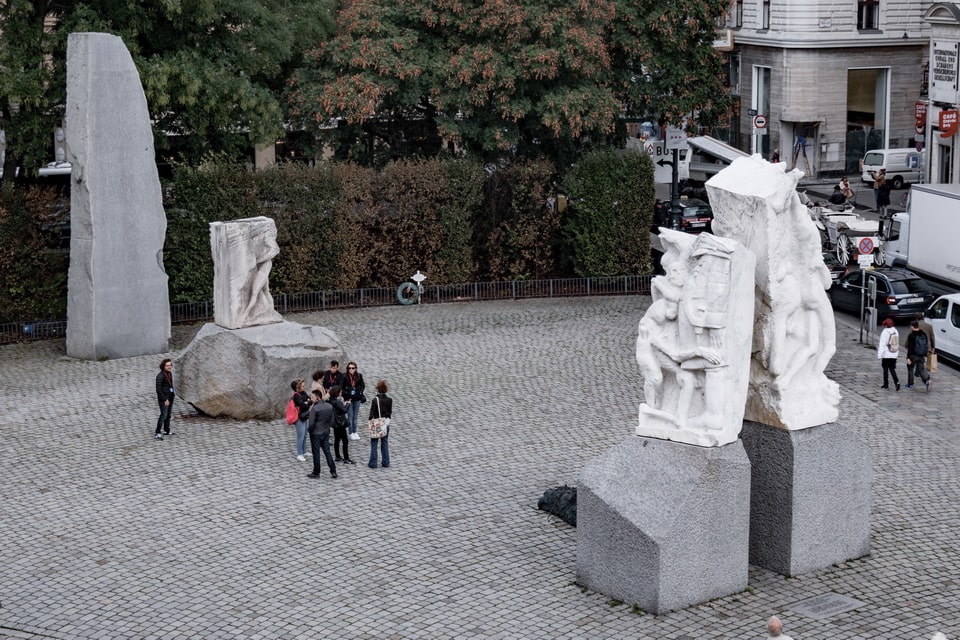 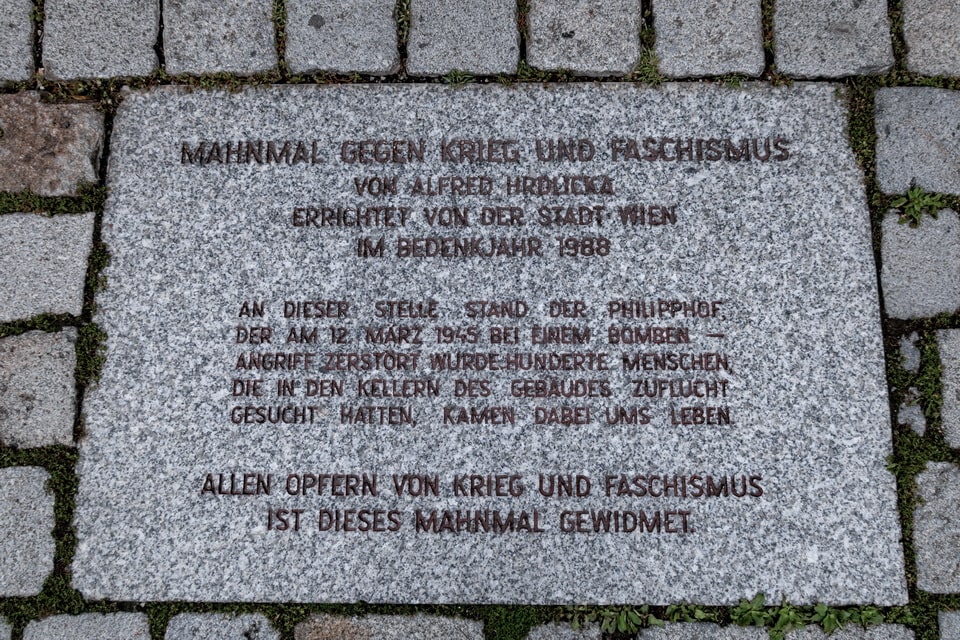 “Tor der Gewalt”, which is generally translated as “Gates of Violence” or “Gates of Power” or sometimes – “Gates of War” is the first compositional part of this Vienna war memorial. A stone scene of images of war was created of a piece of granite rock, taken from the infamous Mauthausen quarry, next to the Mauthausen concentration camp near Linz in Austria. The camp was the biggest among others on the territory of pre-war Austria and had been taking advantage of thousands of prisoners, starting from Anschluss in 1938.

“Gates of Violence” is to be divisible into two separate parts. The one on the left side honors victims of repressive actions and persecutions under the Nazi regime between 1938 and 1945, along with victims of prisons and concentration camps. The right part of the “Gates of Violence” monument honors all casualties of the Second World War, both civil and military. Statues consist of stone images with one particular famous – a figure of a woman upside down, giving birth to a child. It symbolizes the after-war lost generation, who have not seen the horrors of war. 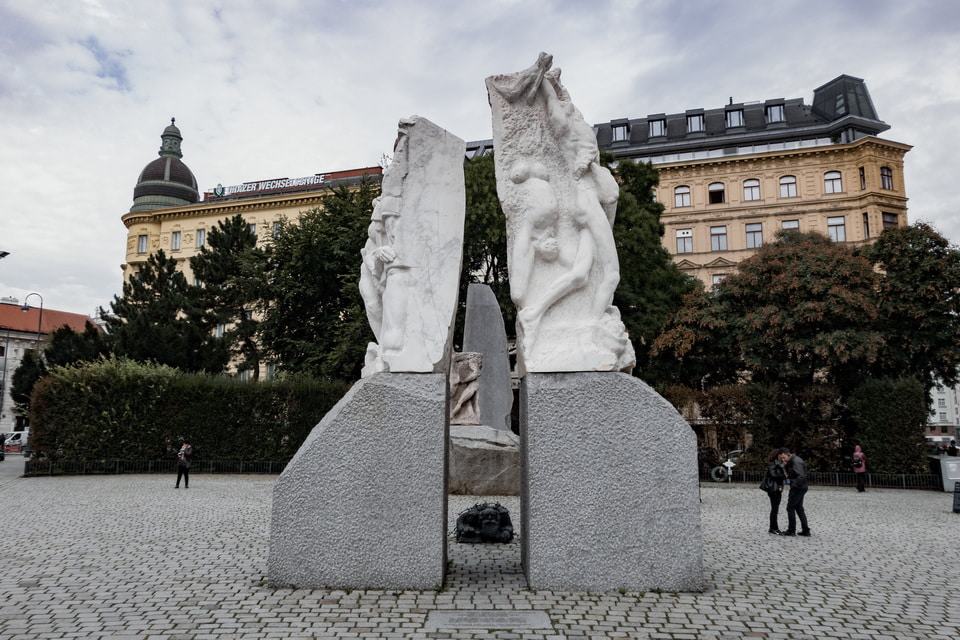 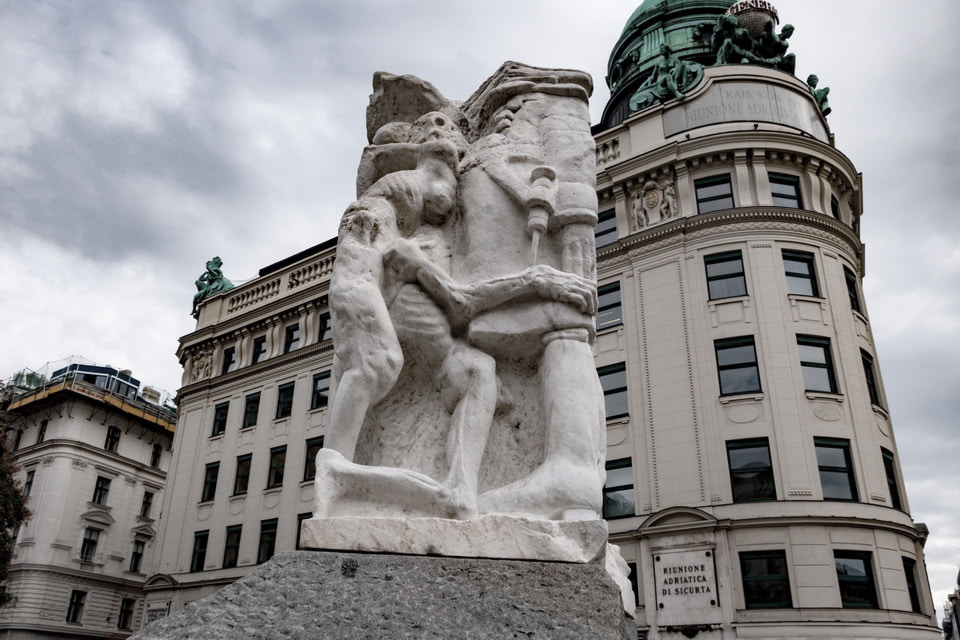 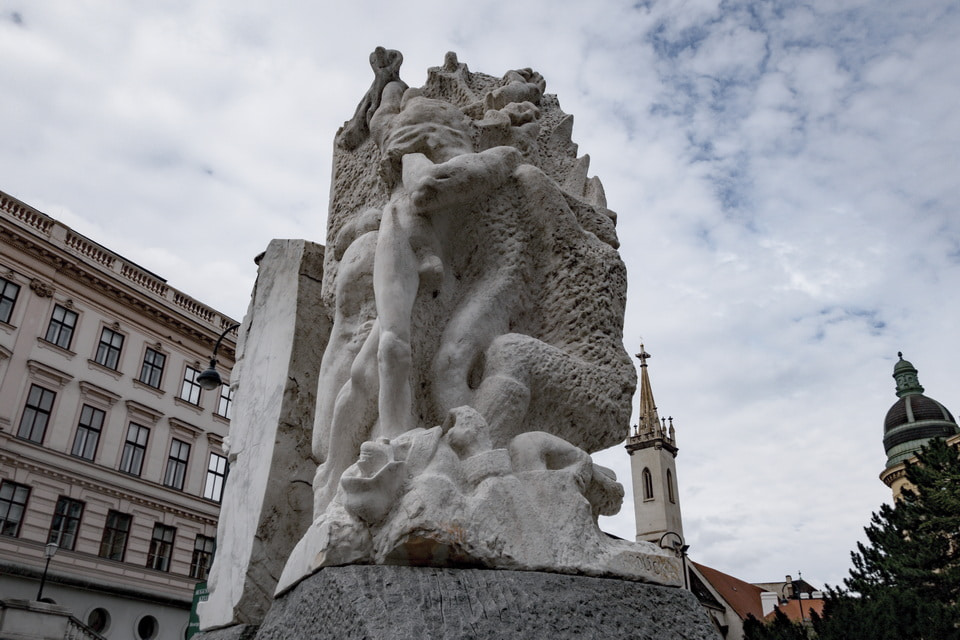 Stepping over the “Gates of Violence”, we see the on-ground bronze statue, depicting an old Jew, who had to suffer humiliation. Just after the Anschluss in March 1938, anti-Semitic actions had become a common scene and, sometimes, Jews were forced to wash streets on their knees, sweeping anti-Nazi mottos. The back of a statue is covered with barbed wire – one of the symbols of imprisonment within concentration camps. This element has been added after a while – people used the bronze statue as a place to sit. 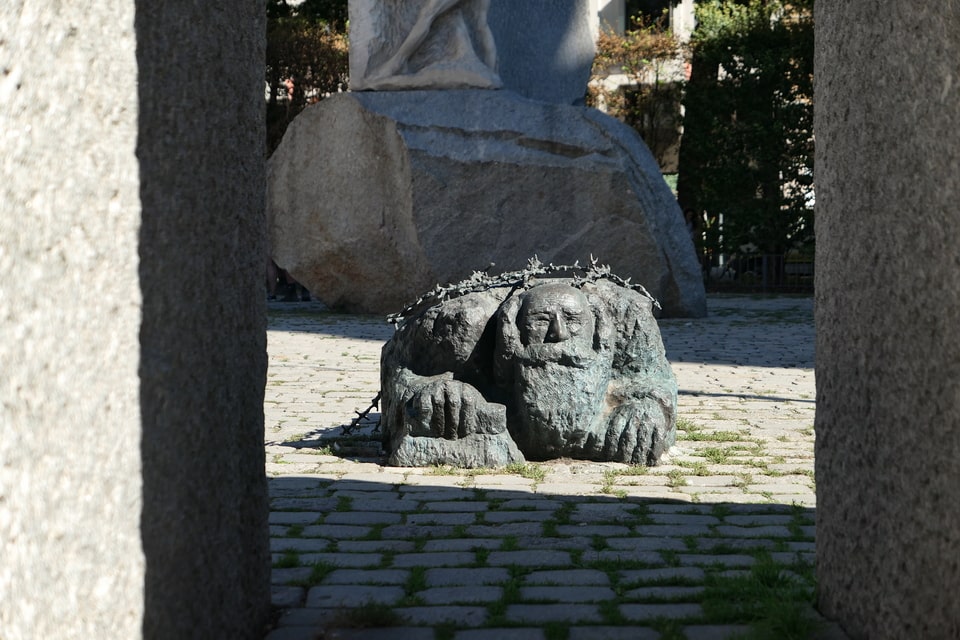 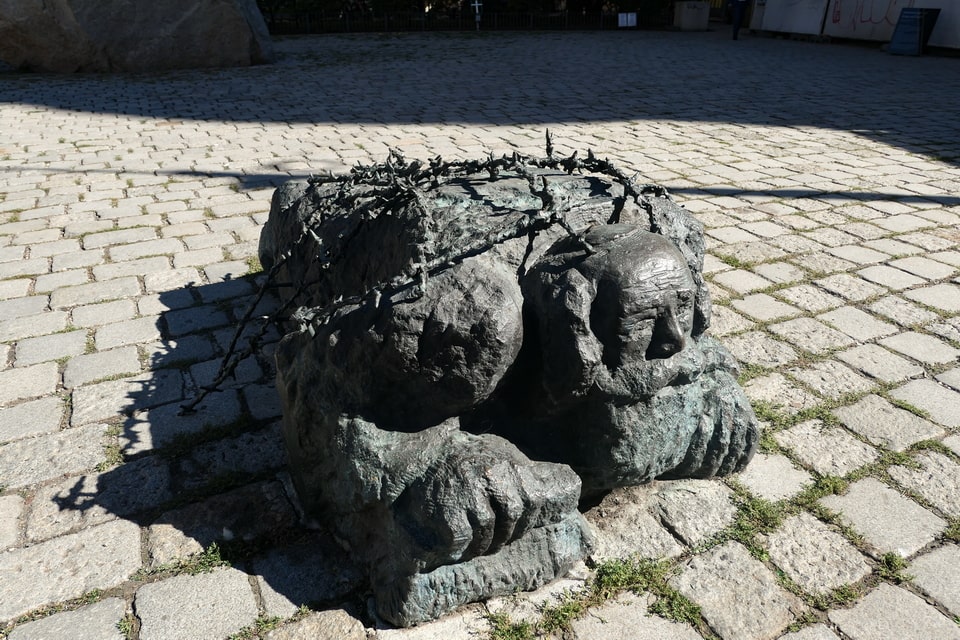 The next composition within Vienna Monument against Fascism is known as “Orpheus enters the Underground world”. Stone man figure transfixed in white marble. The statue honors both people, who resisted the Nazi regime and civil casualties of the airstrike bombing, in particular in Vienna, particularly those, who died under the ruins of the Philipphof house. 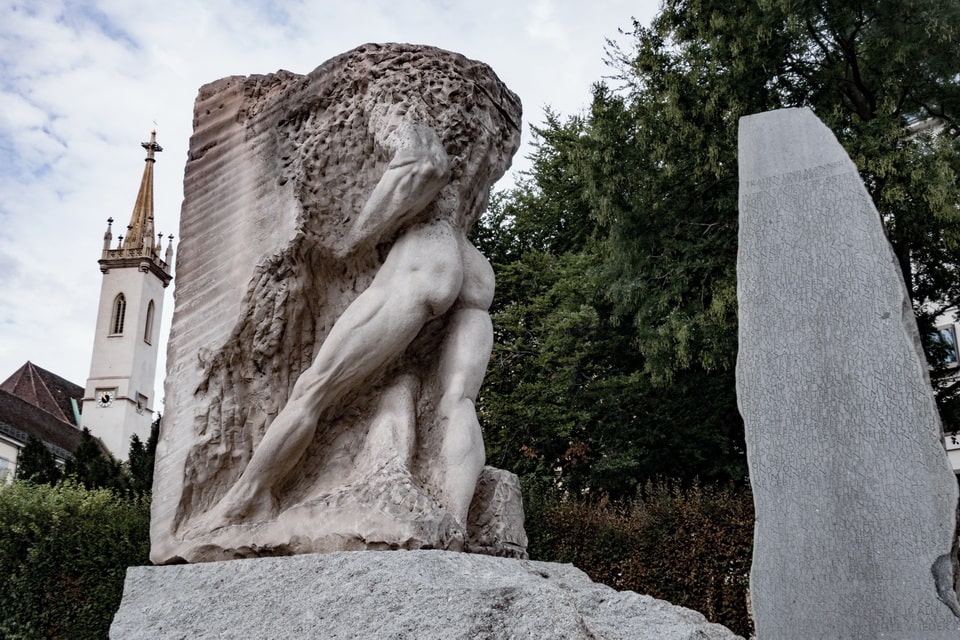 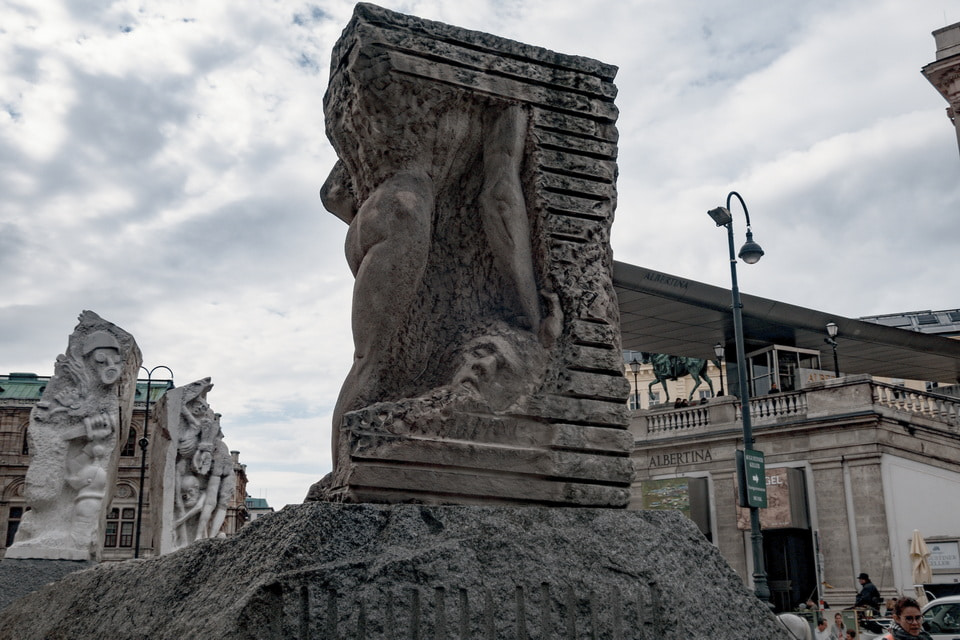 “The stone of the Republic“, stands next to Orpheus and symbolizes the will for freedom and independence. It was covered with the names of Austrians who proclaimed the necessity of the Austrian Republic renaissance and the text of the Declaration of Independence of Austria on April 27, 1945. 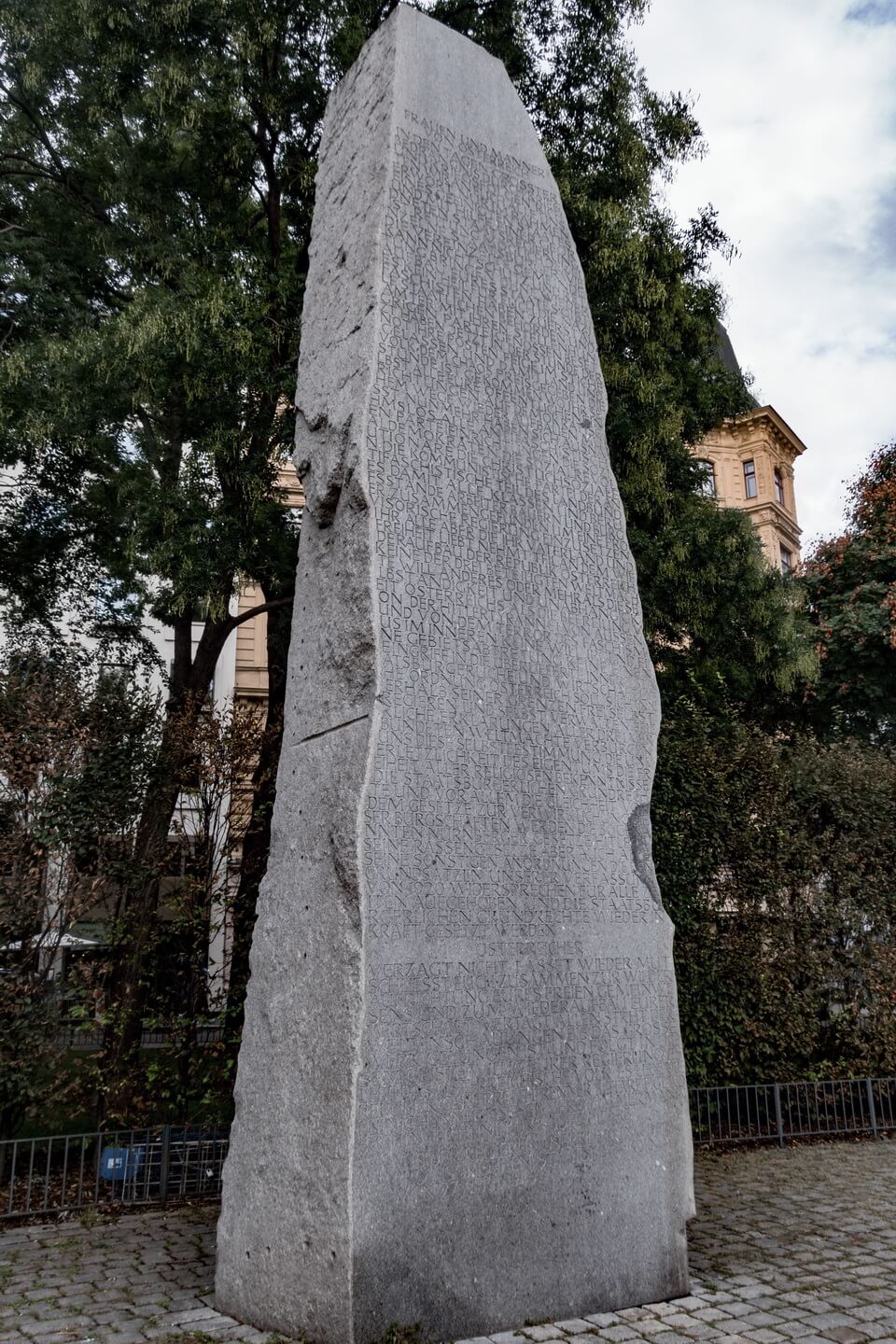 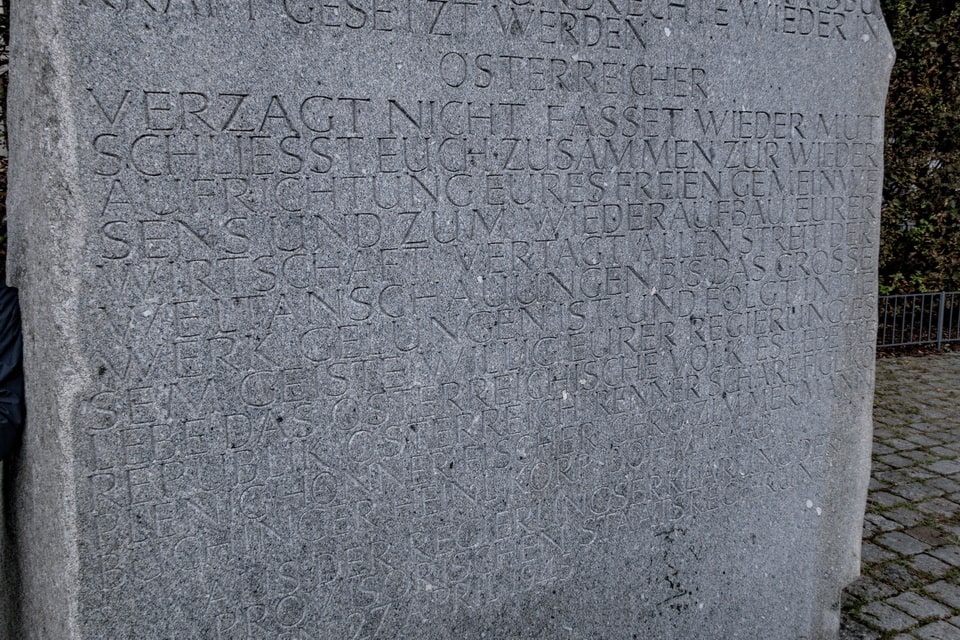