CZECHOSLOVAKIA IN THE SECOND WORLD WAR

The Czechoslovak Republic was established in November 1918 as a political successor of the former and now-eliminated Austro-Hungarian Empire. In October 1938 German Reich occupied the territory of Czechoslovak’s Sudetenland due to the terms of the previously signed Munich Agreement (the Czechoslovak Republic took part de facto). On March 14, 1939, the state had to agree with the German protectorate and was formally occupied by German troops. On the same day, the right-wing political party of Joseph Tito proclaimed the so-called First Czechoslovak Republic, which existed, as a German satellite till the Soviet occupation in the Spring of 1945.

Troops of a new Republic participated in the Polish Campaign in the Autumn of 1939 and took back some previously lost territories. In the Summer of 1941, some military formations of the First Czechoslovak Republic took part in the campaign against USSR, known as the “Barbarossa operation”. Despite the union with Germany, some military units of Czechoslovak shifted their side during the next years of war in the East and joined partisan units against Wehrmacht.

In the Spring of 1944, when Red army formations had reached the border with Czechoslovak, the German Wehrmacht assisted their minions and Joseph Tito in creating two infantry divisions of 24 000 soldiers total. Their mission was to give a battle to the Russians and help Wehrmacht to hold the Eastern front. In August 1944 Republic witnessed an anti-fascist rival with the core strength in partisans and particular units of the army. Joseph Tito asked for help and German troops occupied Republic and arrested rival leaders, but the resistance was not eliminated. Remnants of the movement joined Russian troops, which crossed the border on September 21, 1944, as 20 000 of the Slovak army after this. German army lost more than 10 000 men.

Till the end of 1944, only a small part of Czechoslovak was liberated. The Winter campaign succeeded on the whole front and the local population now could join the movement against Germany and Tito’s party.  “Bratislava–Brno Operation” was initiated on March 25, 1945, and finally resulted in the total liberation of the Czechoslovak territory from Germans and former government and, by this means, Soviet occupation. The liberation of Bratislava was one of the main goals. The total military casualties of the Soviet army during the liberation of Slovakia reached 100 000 men.

CREATION OF THE SLAVIN MEMORIAL

April 4, 1945, is the formal date of the liberation of Bratislava, the modern capital of Slovakia which is still an important annual event. The battle between the German 6 Army and 3-rd Hungarian Army on the one side and 2 Ukrainian Front on the other started on April 2. The complete territory of Bratislava was liberated on April 5, 1945. The total volume of casualties is not to be precisely determined, but Soviet units created a military cemetery on one of the city hills with 6845 men buried there. Within the next fifteen years after the war, it remained a cemetery hill.

In 1957 the new government decided to create a memorial complex, devoted to the upcoming 15th anniversary of the liberation. Slavin memorial was the only obvious candidate for this role. Slavin Memorial Complex in Bratislava was ceremonially opened on April 3, 1960, and a year after it was established as a National monument. Within the next decades, Slovak senior officials, of course, presidents and foreign guests have been annually coming here to the Slavin Memorial to honor the memory of soldiers who fought and died for freedom. 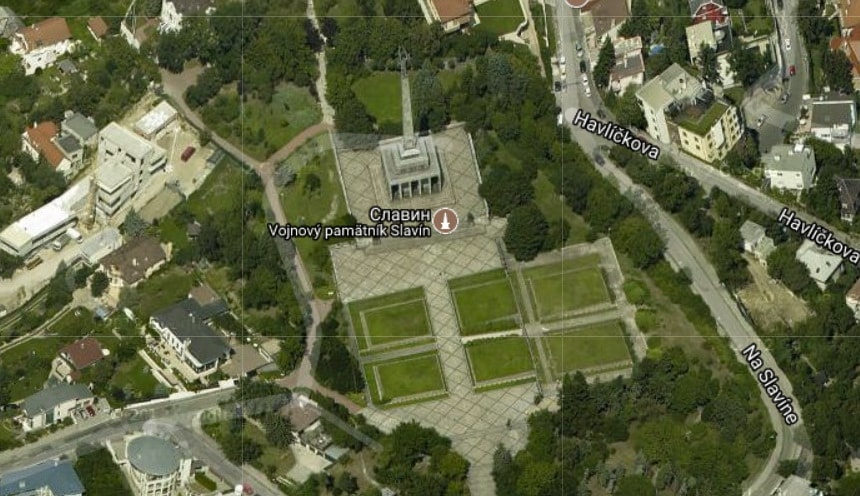 Slavin Bratislava is a monumental military monument on the highest hill in Bratislava, which provides you with a panorama of the whole city. Its obelisk can be seen from most city districts. Slavin Memorial Complex is located almost at the very heart of the Slovak capital, near the Old City of Bratislava, and at a close distance to Bratislava Castle. As the main obelisk is noticed from anywhere, it’s no problem to get to this site (20 minutes from the city center). 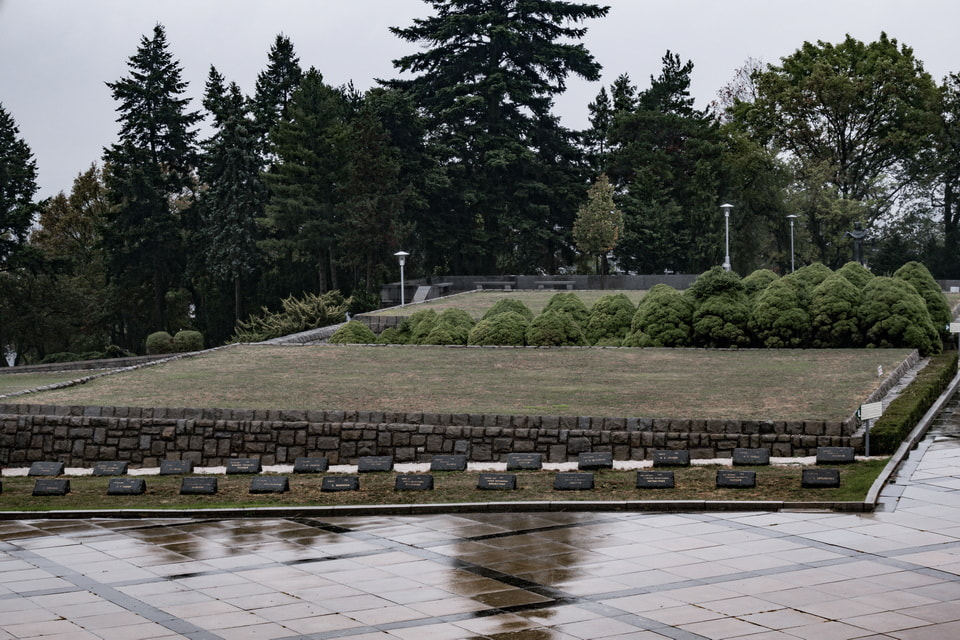 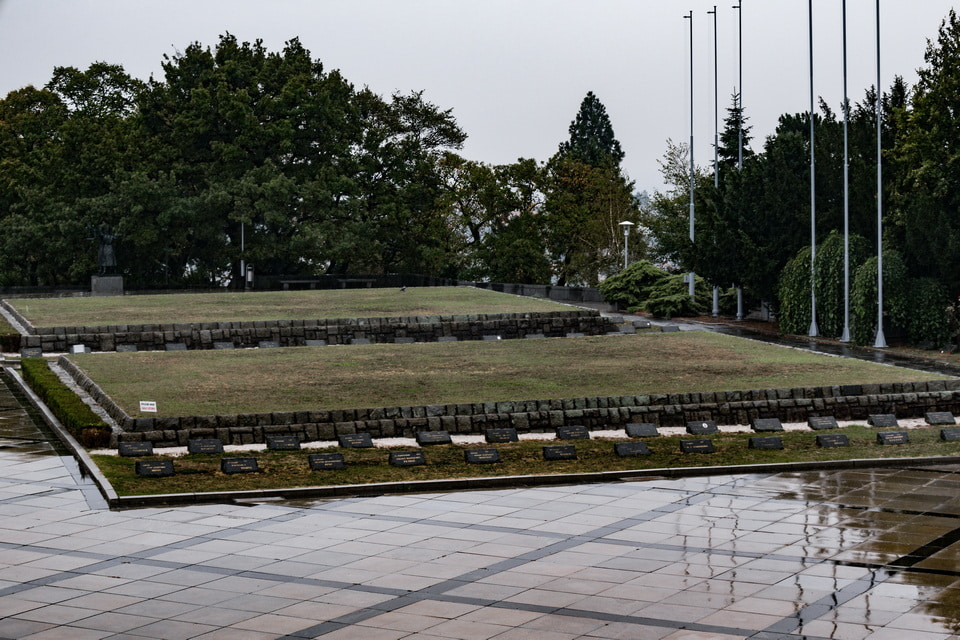 The monumental double-deck marble staircase is a common ceremonial entrance to the Slavin Memorial Complex. Its central part between two stairs is decorated with an anaglyph with five soldiers, one of which fell on knees to kiss and honor the Colours. We can see a memorable inscription in Slovak and Russian:

Never forget the heroes, who died in defense of Liberty and Independence of our country! 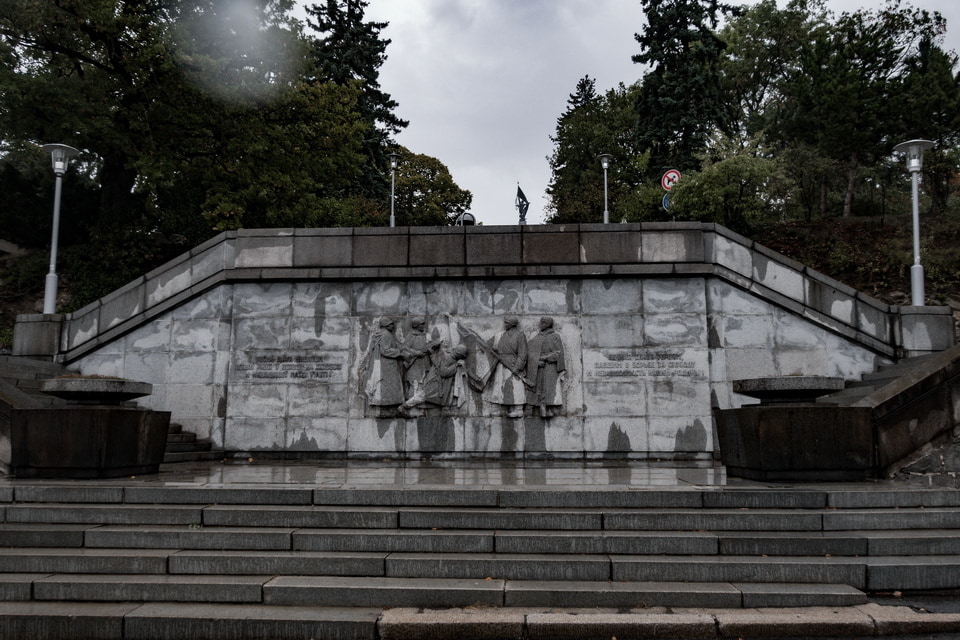 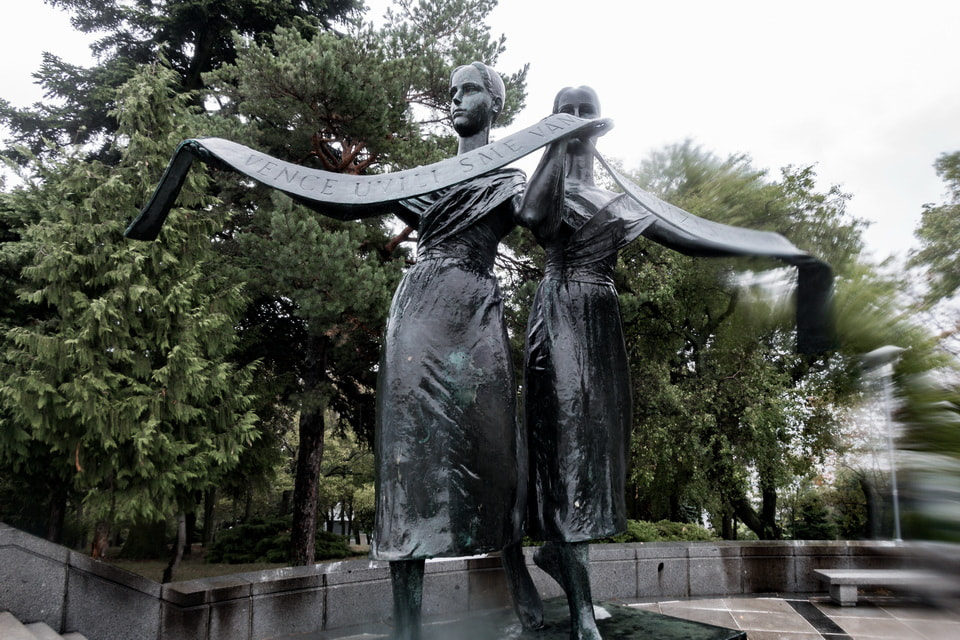 After getting up the staircase, you will face an incredible panorama of the most well-known parts of the Slavin Bratislava: An obelisk 50-meters high and a square covered with marble plates. On both sides, you can see six collective graves and 278 individual graves with names, birth and death dates, photos, and flowers. Slavin Memorial Complex in Bratislava honors the memory and contains the graves of 6 845 men and women. 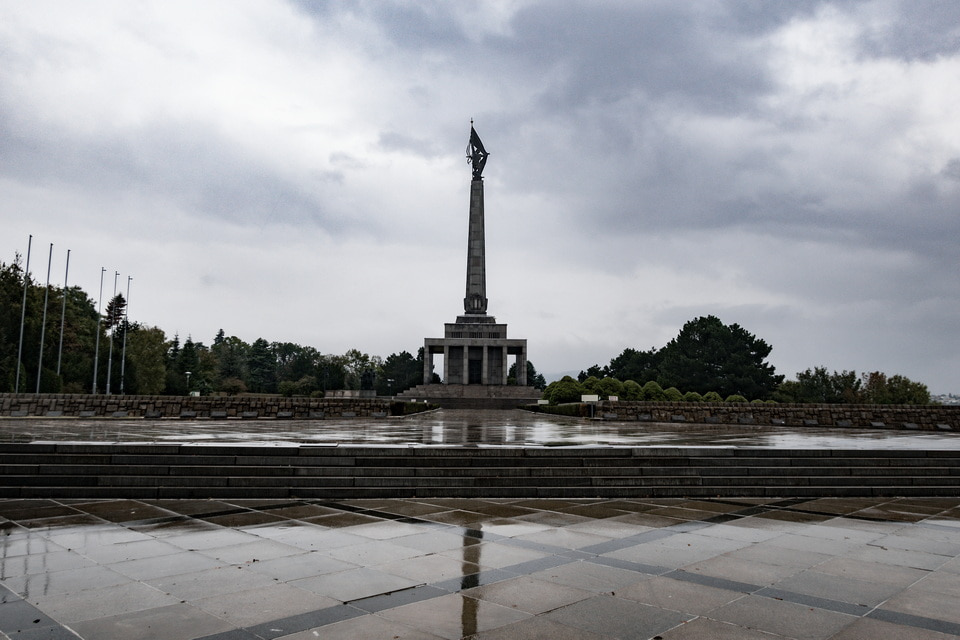 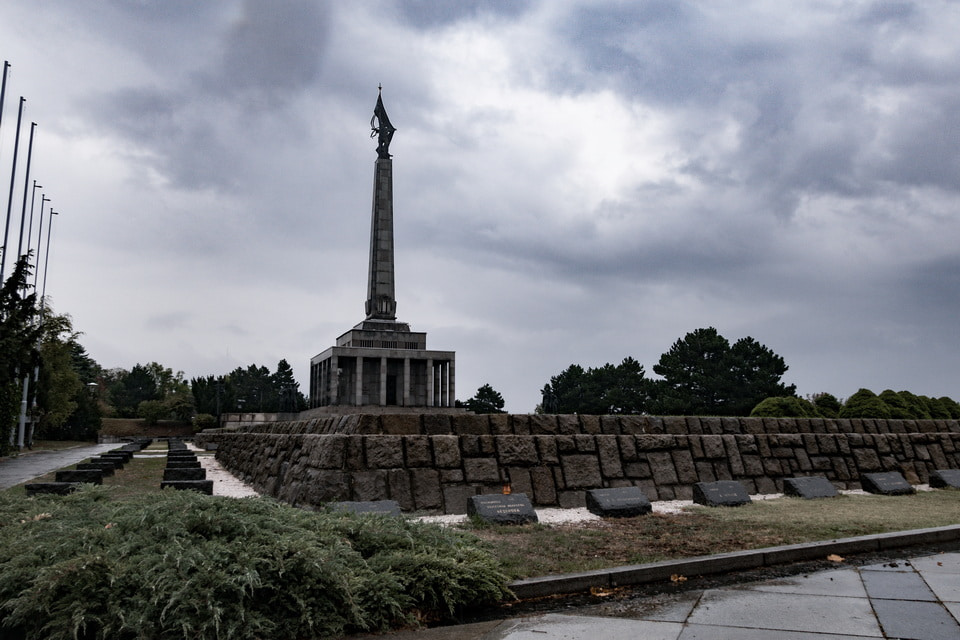 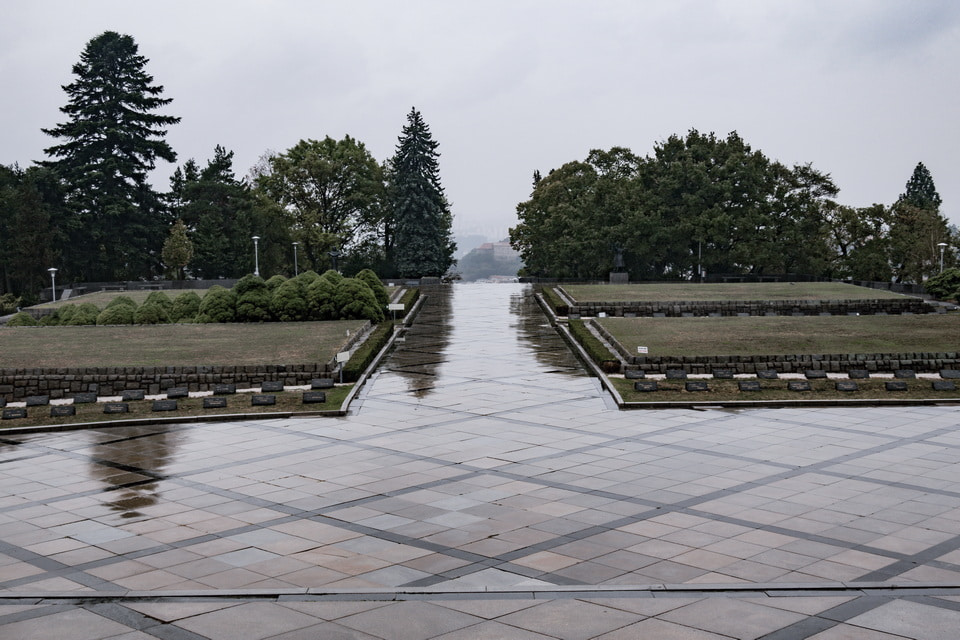 In addition to small alleys, which unite parts of the Slavin Bratislava, there is also a big marble plate on the right side. It remains the inscription of the names of soldiers and civils, who gave their lives liberating Bratislava and Slovakia (in particular those who died in hospitals, were also buried here, in Slavin) 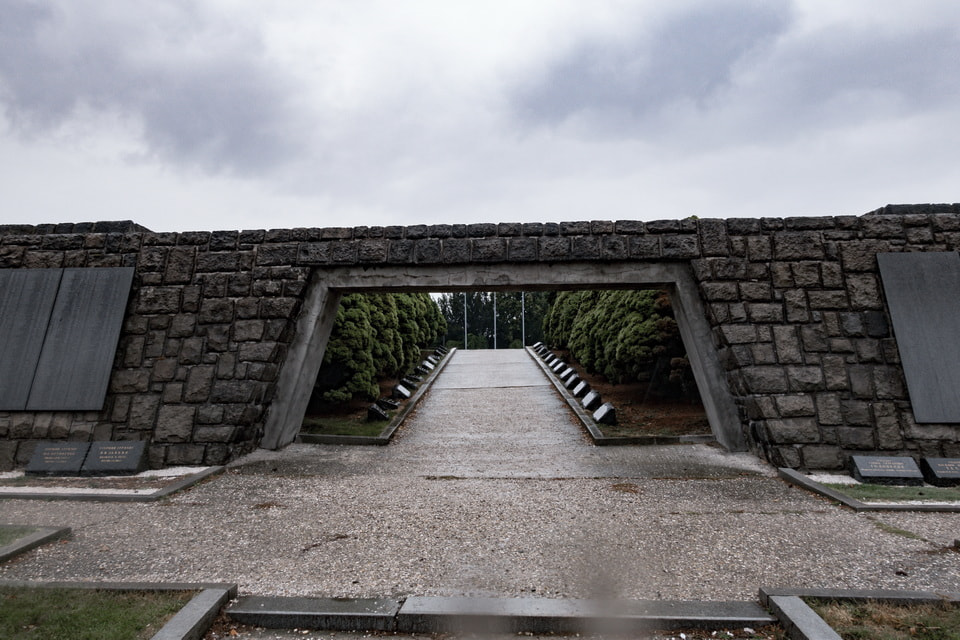 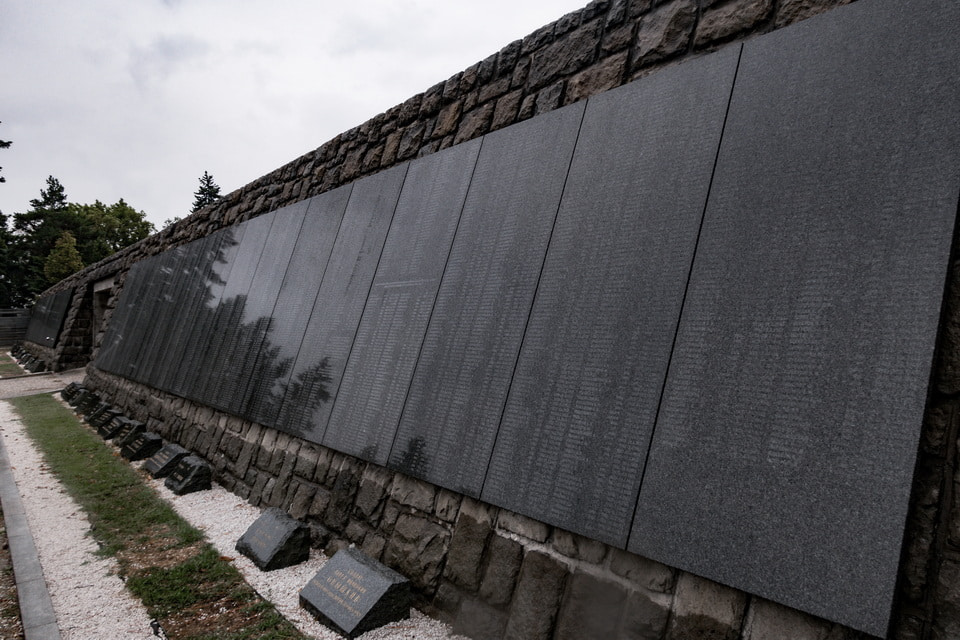 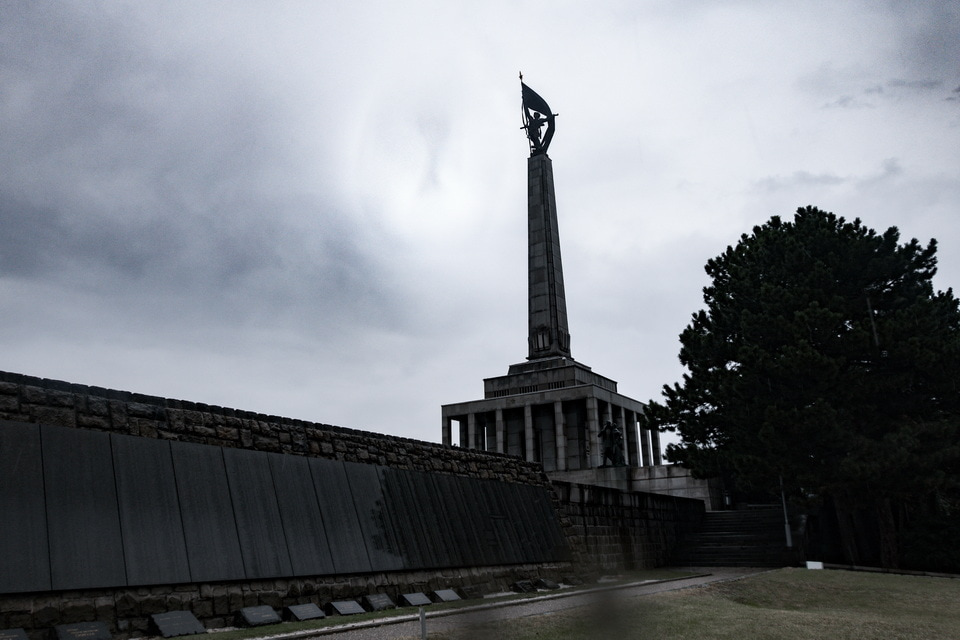 The 50-meter high obelisk is the very heart of the Slavin Bratislava, which can be easily noticed all over the city. It consists of two parts: 39 meters high pylon and an 11-meter statue of a soldier. It stands on the Hall of Honor with a marble staircase all around. Inside, behind a big bronze door, we can find a noticeable marble plate. Outer walls of the Hall of Honor are decorated with stars and titles of cities and villages, along with the dates of its liberation in 1944-1945. 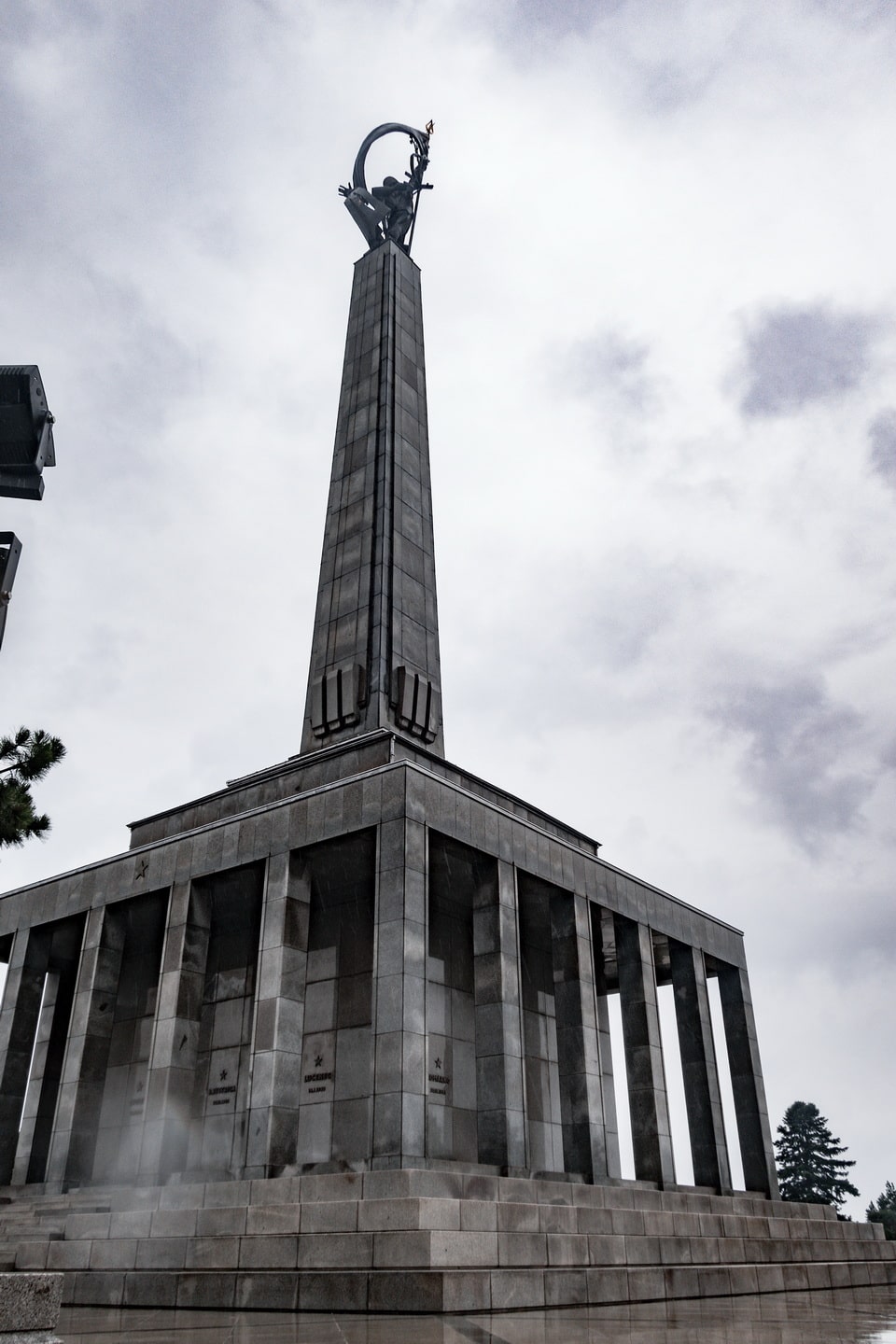 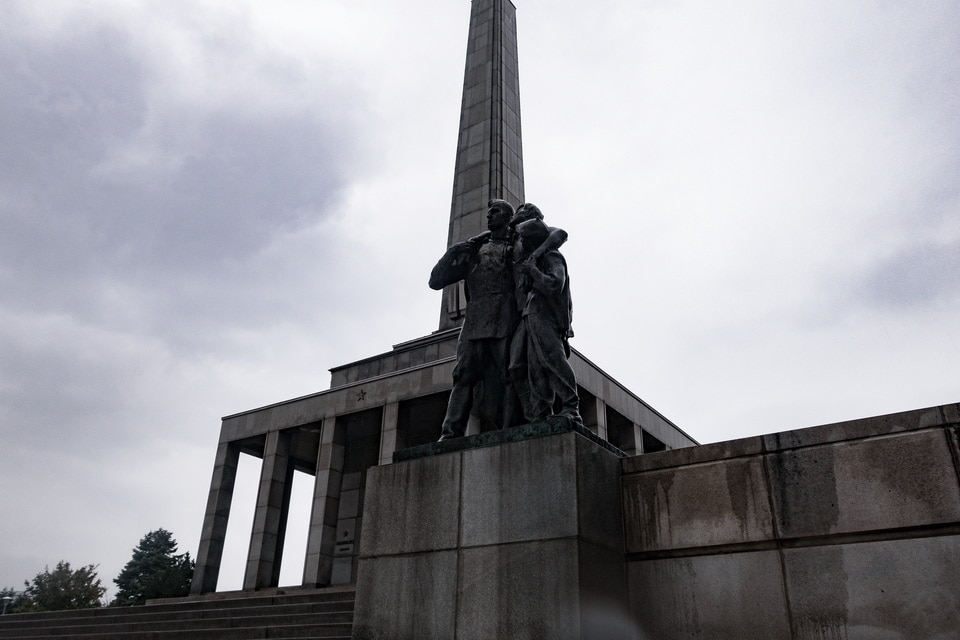 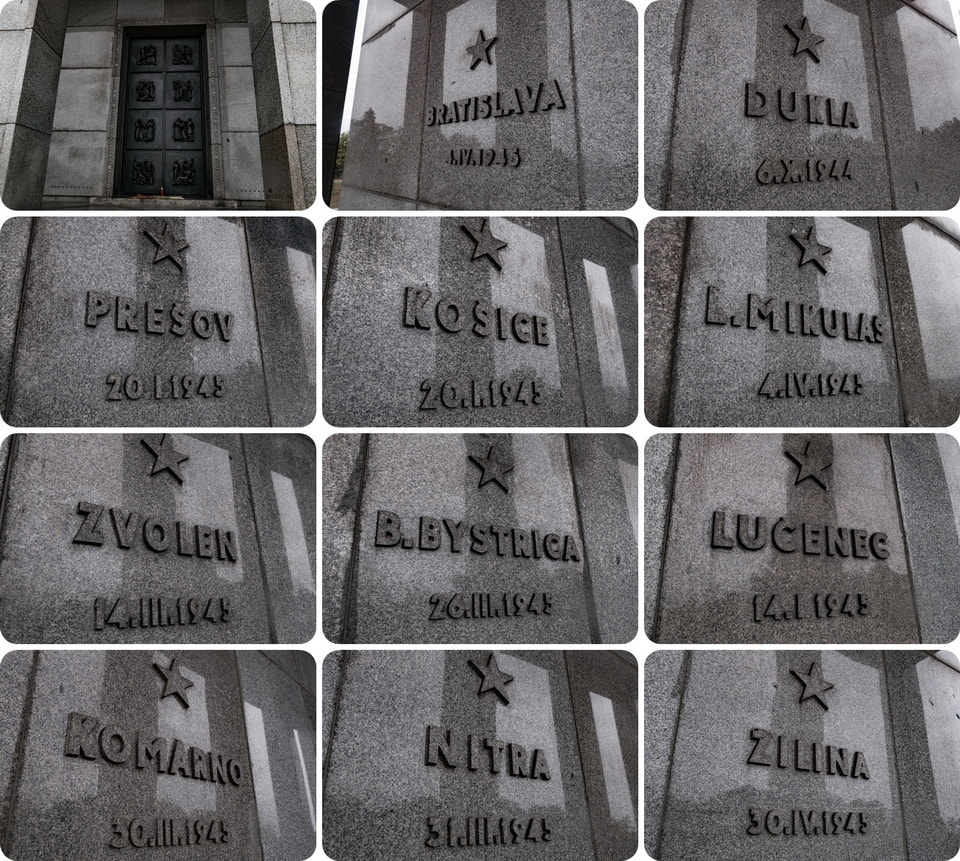 If you decide to spend some more time walking beside Slavin Memorial, it also contains half-destroyed fortifications of the First World War, a wooden Cristian Cross, and empty water poles. The whole visit to the Complex will take you an hour or less as all components are close to each other. After all, you can make some gorgeous photos of Bratislava. 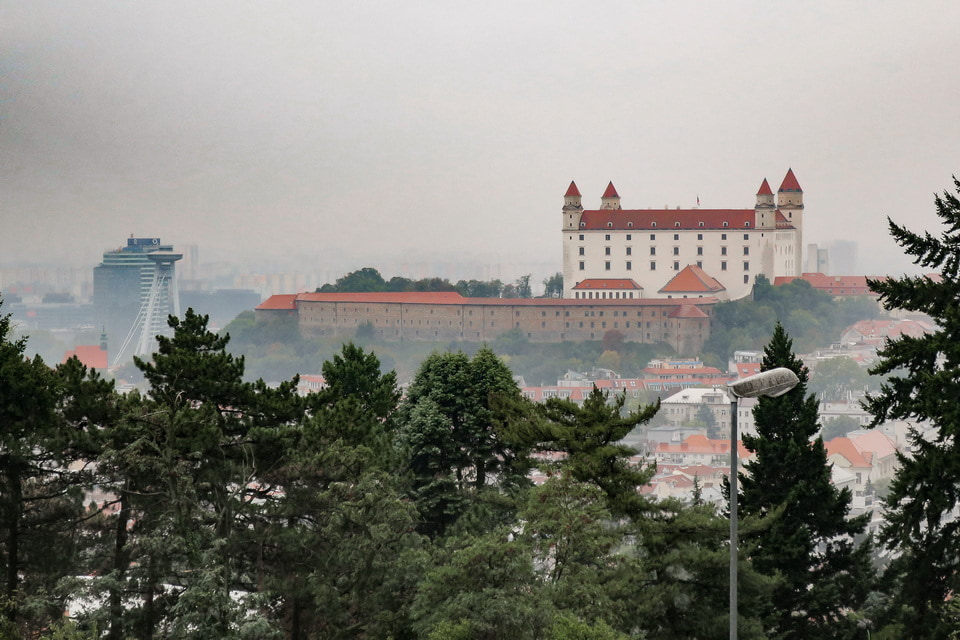