German leaders realized the importance of bombardment aviation and air defense during the process of re-weaponing of new aircraft forces – the Luftwaffe. The common practice of air defense barriers outside the cities turned out to be inefficient within the realities of a new World War. This approach makes cities almost unarmed if the aircraft managed to reach the center. German Luftwaffe obtained great experience in city bombing and aircraft defense in Poland when German air forces destroyed a significant part of Warsaw. And, of course, the Battle for Britain, had transformed the realities of war and aircraft defense. The turning point for the future Nazi Flak towers (Flakturm) was a bombing raid on Berlin, accomplished by Brits on August 26, 1940. It had a little more than just a military impact but was physiological for both sides. Adolf Hitler was impressed by this event and he now had an interest in Anti Aircraft Towers (Flakturm or Flakturme) – a project of new massive Flak towers, which would have to protect German cities, such as Berlin and others. Nazi Fuhrer gave strict instructions to force the construction of a new type of anti-aircraft defense. Hitler even made his drawings of the future flak towers with Albert Speer. Alongside Berlin, Flakturm (Flak towers or anti-aircraft towers) tended to defend Hamburg and Vienna in the first places. 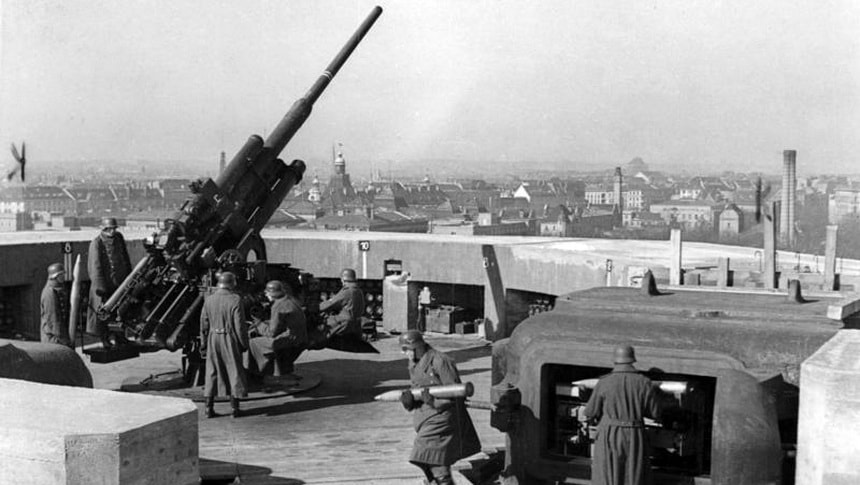 ANTI-AIRCRAFT FLAK TOWERS AND THEIR TYPES

German Flak towers had both to protect the center districts of big cities and be a part of a compact urban area of Berlin, Hamburg, and Vienna. Anti Aircraft Flak tower had to deliver fire within 360* range and trim its guns vertically. The new tower defense system is also considered a space for radar sets and giant lights. Flak towers would have to be constructed on a pair basis to separate air defense. One was called Gefechtsturm or G-Turm or G-tower – a gun tower with guns (also battery tower, Large Flak Tower). The second supporting one flak tower was called Leitturm or L-turm or L-tower – lead tower or fire-control tower. Anti Craft towers were connected with wires and tunnels at a distance of 200-400 meters. As the construction of German flak towers tailed away from 1940 till the end of the War in 1945, the architecture of the Luftwaffe tower defense was modified. These alterations had an impact both on the Gun tower and Fire-Control tower contracture.

Flak tower Generation 1. The towers were in a process from 1940 till the end of 1942 and presented by all three Flakturm complexes in Berlin (all flak towers in Berlin are of Generation 1) and one pair of towers in Luftwaffe. Flakturm Vienna did not have towers of the first generation.

Flak tower Generation 2. Were constructed from October 1942 to October 1944 and presented with two pairs of anti-aircraft towers. One Flakturm complex was built in Hamburg and one in Vienna (the first Vienna Flak Tower in Arenbergpark).

Flak tower Generation 3. Two pairs of Vienna Flak Towers of the third generation were constructed from May 1943 to January 1945 and have become the last Nazi flak towers in German Reich. Other cities were not destined to have WWII tower defense.

Construction of this pair of Vienna anti-aircraft flak towers of Generation 2 was started in October 1943, five years since the Anschluss and under Nazi rule, and was ready for operation already in December 1943. This complex became the first WWII tower defense of Flakturm in Vienna.

Gun Tower in Arenbergpark is 42 meters high with 57 meters sides. It has walls 1-3 meters thick within different parts. This Vienna Flak tower had 8 stores and contained multiple premises and elevators. The firepower of Arenbergpark Flakturm flak tower involved 8 guns of 128 mm caliber and 16 guns of 20 mm caliber. Upper floors and fire stations contained a complex system of air ventilation to get rid of gun gases. 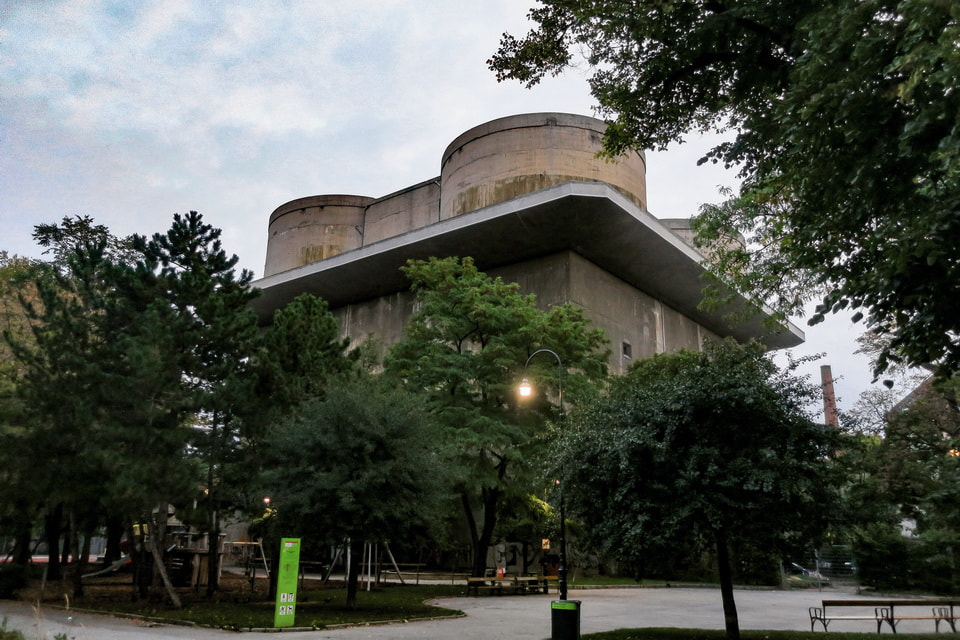 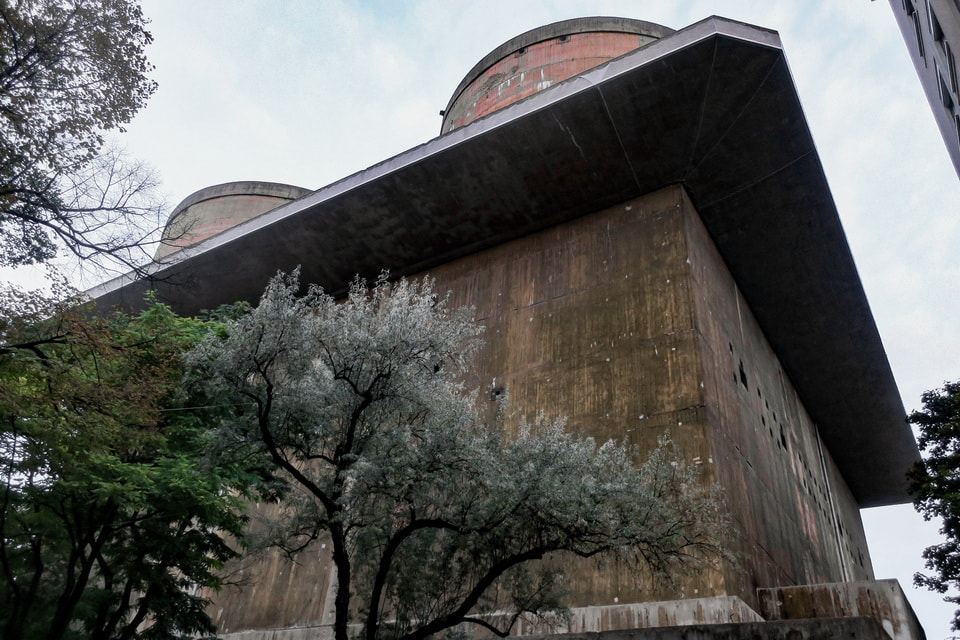 The Fire Control tower in Arenbergpark is 44 meters high with quadrate architecture (this flak tower’s sides are 23 and 39 meters). Alongside with fire control infrastructure of the anti-aircraft tower defense, four of eight floors of this lead tower Flakturm placed air-craft shelters for enormous 15 000 people, both with a hospital for 800 cots. After World War Two, the lower premises of this Flak tower in Vienna was used as storage. Today a plate on the garage door says that this Vienna Flakturm is now storage by a construction company, named “BIG” – a place on reconstruction with now does not receive visitors for exhibitions. 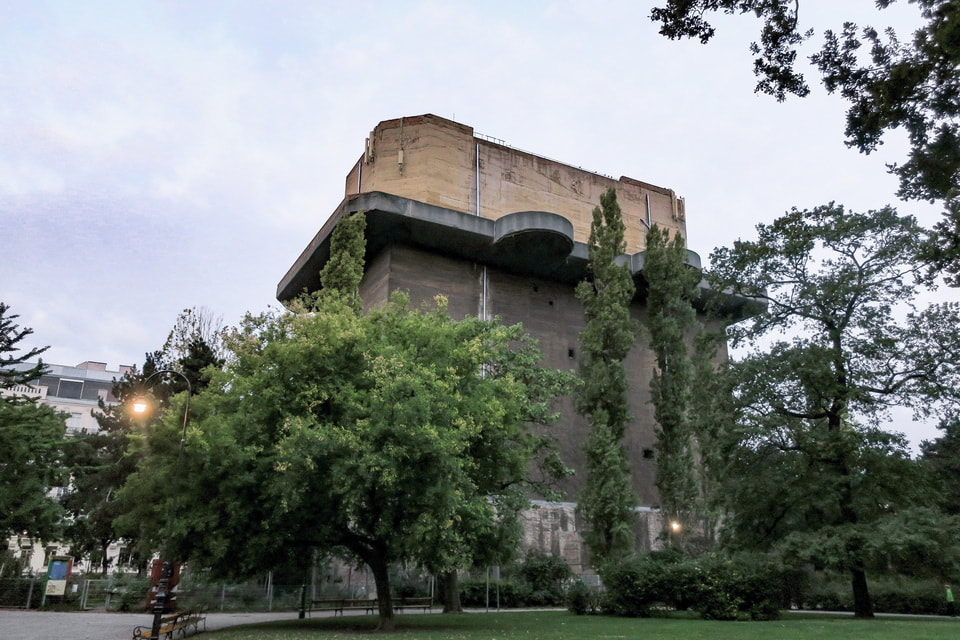 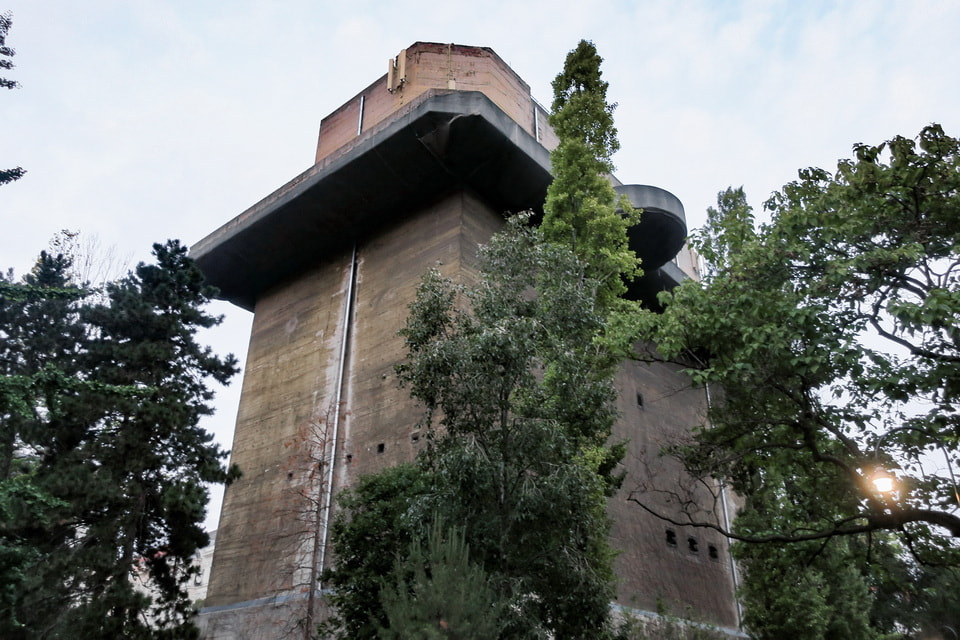 Construction of the second Flakturm Vienna flak tower anti-aircraft complex started in October 1943 with the first exploitation in July 1944. Flak towers of the third generation were built only in Vienna. Unless two Nazi flak towers in Stiftskaserne and Esterhazypark were built on different levels, it was compensated with architecture.

Vienna Flak Gun tower in Stiftskaserne is located at a small high with its own 45 meters high, has nine stores, and is 43 meters in diameter. Stiftskaserne Vienna anti-aircraft tower seems to be round but in fact, it has sixteen corners. It was armed with eight guns of 128 mm in four pairs and with 32 guns of 20 mm (eight stations of four guns). Today this particular Vienna flak tower is stuck between buildings, most of which are the property of the Austrian army. They consider the Flakturm Vienna flak tower as an aircraft shelter. Guards do not permit you to enter the territory but you can take a picture of a tower from the windows of stores nearby.

The fire control flak tower in Esterhazypark is 47 meters high. This German Luftwaffe L-tower (Lead tower) was equipped with low-caliber guns. Few stores were used as hospitals and aircraft shelters for civilians of Vienna. After the War, this WW2 flak tower becomes the most “usable” among the six Vienna flak towers. It was given to the Vienna municipality after 1945. From 1954 to 1962 control flak tower in Esterhazypark contained telescopes of local schools and served as an observatory. Flak tower was a place of great interest with a total volume of visits – 31 000. After 1957 some premises of the former Vienna anti-aircraft tower are in use as the Haus des Meeres (House of Sea) aquarium with 4000 square meters of space on six floors. In 2015 the municipality sold this Flakturm Vienna for symbolic 1 euro to the aquarium. Today one of the walls is used as a cliffhanger wall and a local kinder spot is settled nearby. 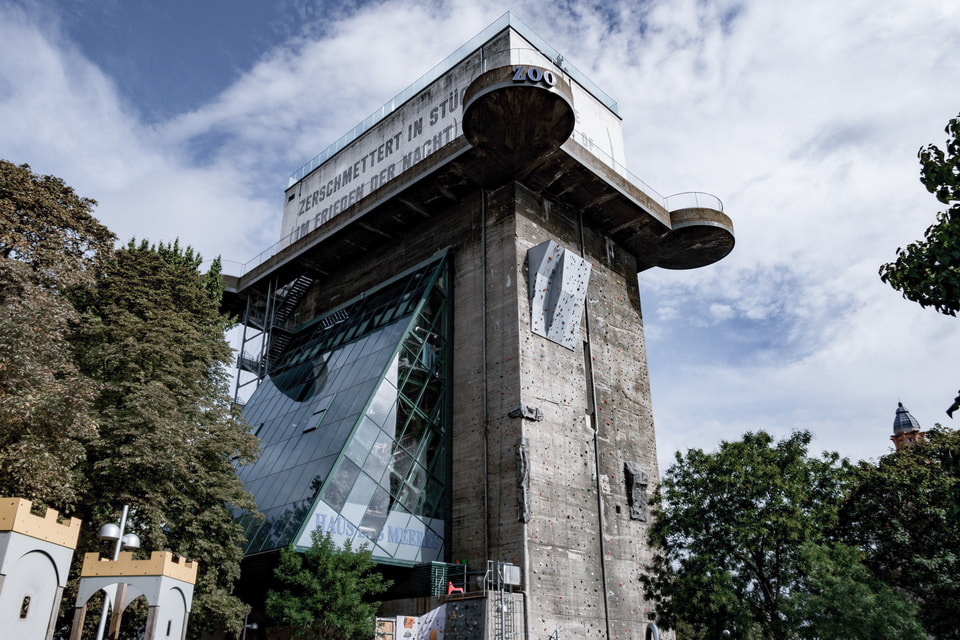 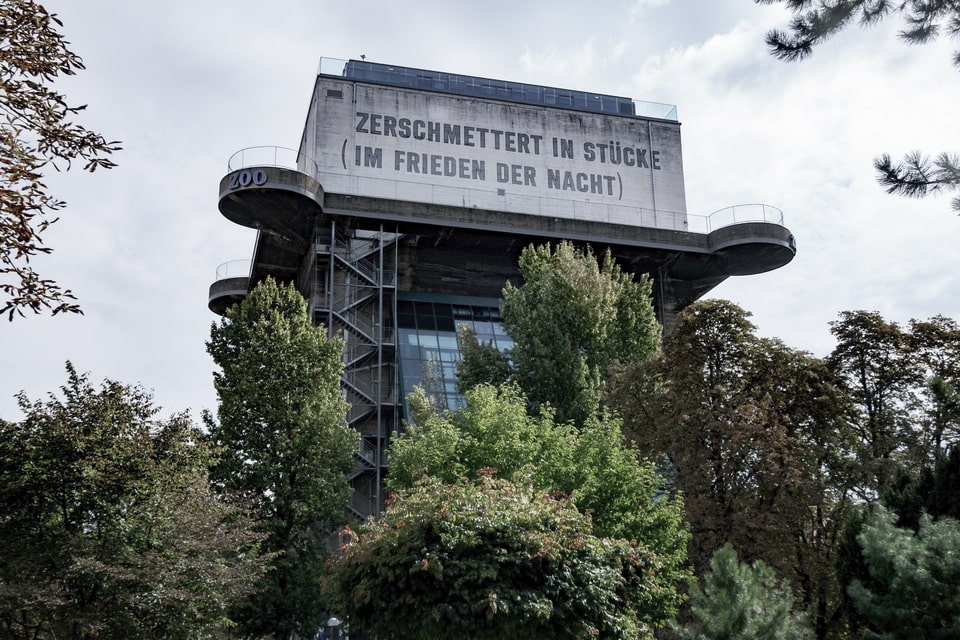 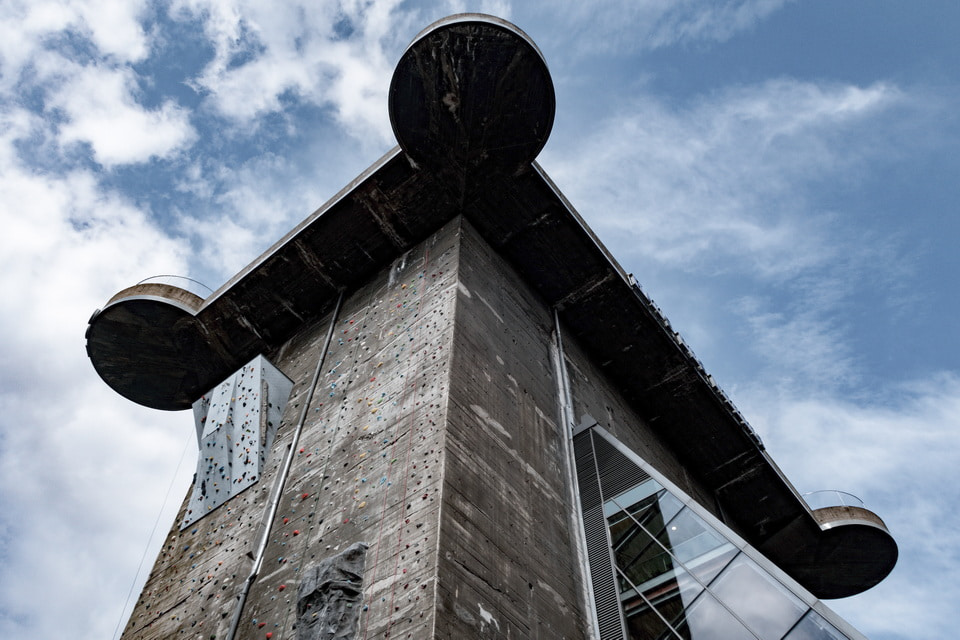 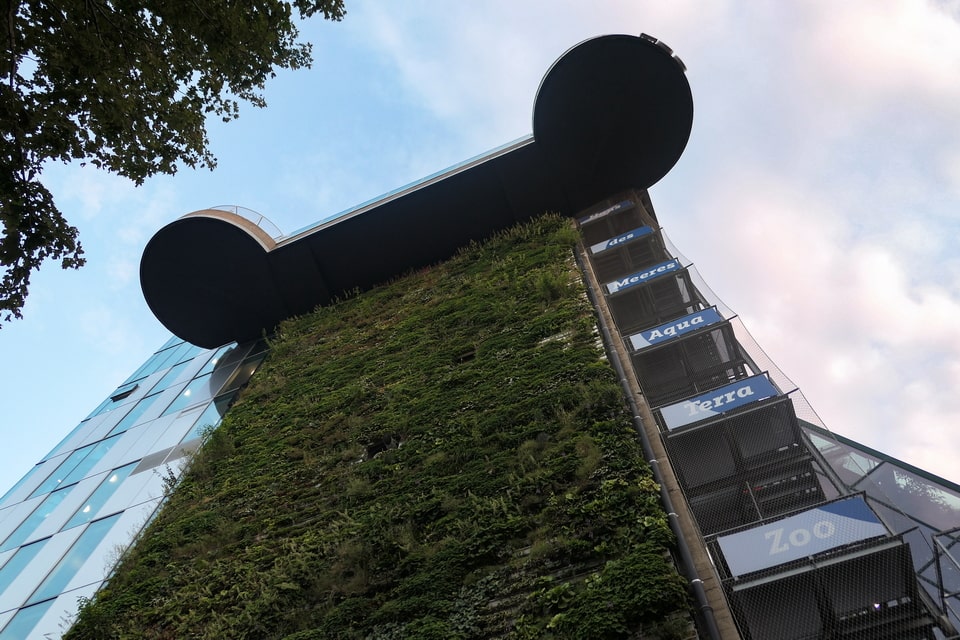 Two last Vienna anti-aircraft towers in Augarten were constructed between July 1944 and January 1945 and were the last flak towers in Germany, despite the ambitious plans of the Luftwaffe and Adolf Hitler. The process of construction involved the building up of a separate railway line to deliver all the materials to the future Flakturm (Flak tower Vienna) site.

Gun Vienna Flak tower in Augarten is the highest and the most technically sophisticated of all Luftwaffe Anti-aircraft flak towers in Vienna and the Third Reich. It was destined to be the only one of a kind. Initially, this Vienna Flakturm was to have ten floors but gained thirteen with 55 meters’ total height. G-Tower in Augarten has a roof of 3.5 meters thick. In 1946 local children played with fire within the premises and caused a fire and explosion of 2000 128 mm munition. The concrete roof jumped and a part of the whole construction was damaged. In 2006 one of the platforms was taken down and the whole flak tower was hardened with metal wires. Today one of the sides is covered with a title: “Never again” (meant World War Two and national socialism in Austria). The Gun tower in Augarten is now a place for mobile antennas. 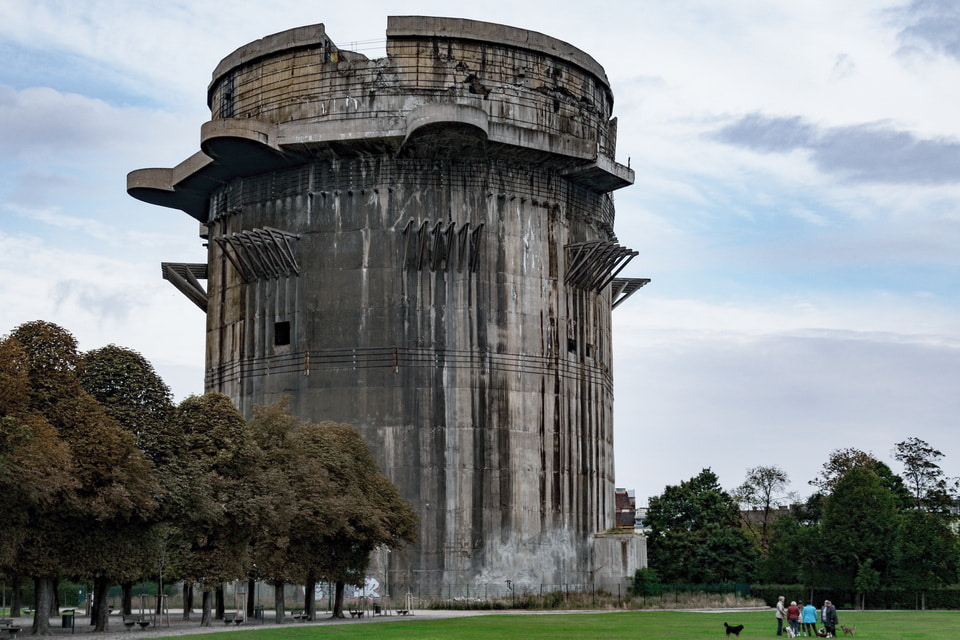 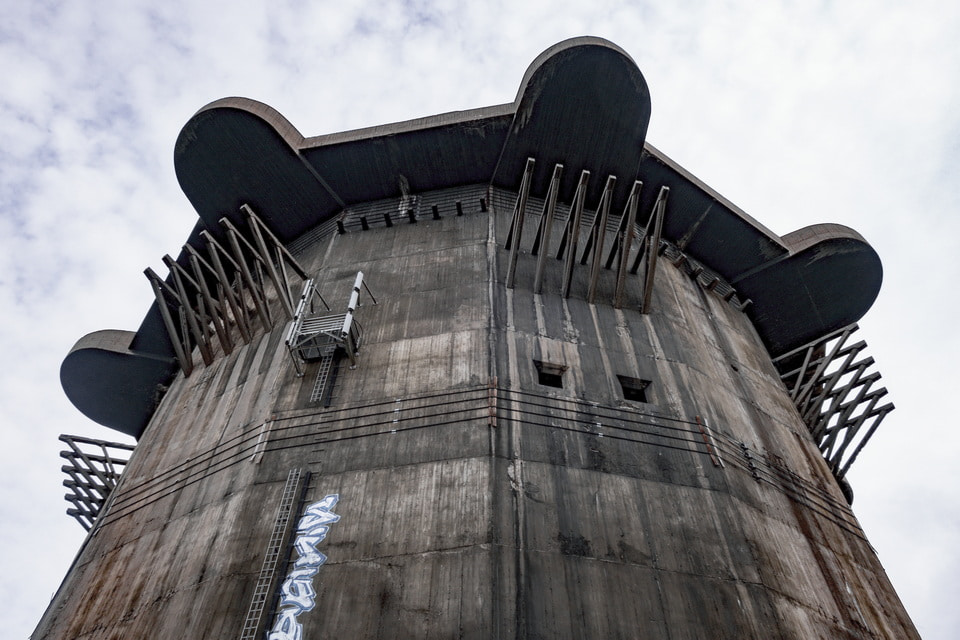 Fire Control Vienna Flak Tower in Augarten is 400 meters distance from G-Tower within the same park. Quadrate flak tower has sides of 31 and 18 meters. It is also a city property but out of use and abandoned. It was once planned for a camp-out open cinema on the roof and storage for computer hardware but it has failed to materialize. 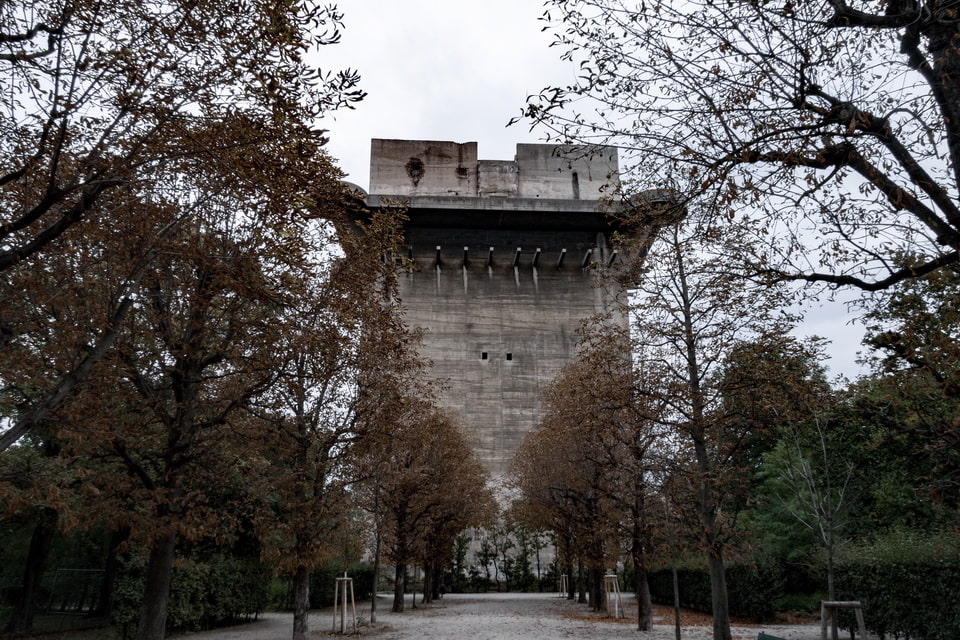 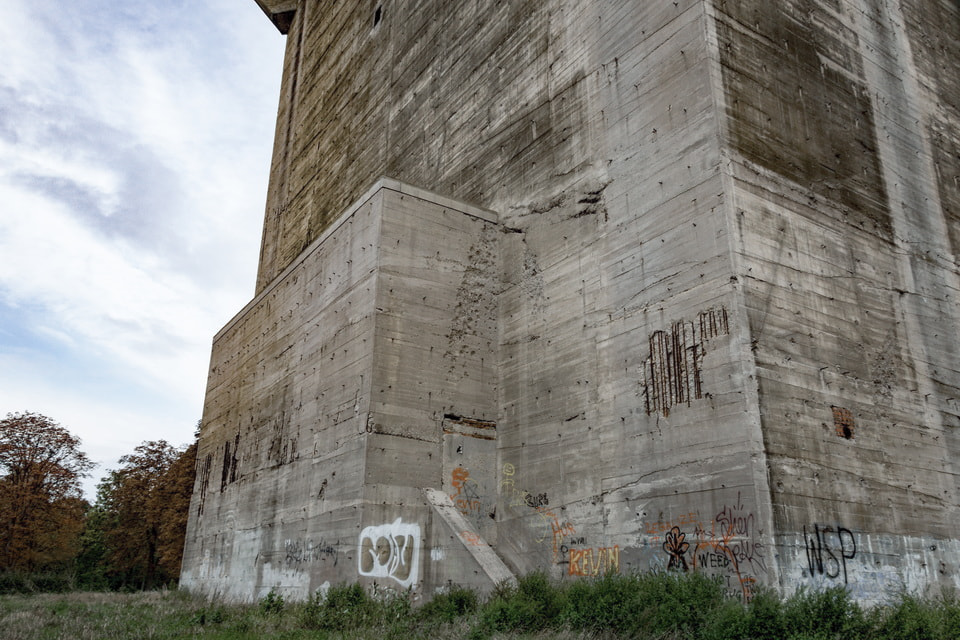 I am very grateful to war archives, museums, libraries, private collections, and writers for the historical photos in this article. To the extent that some author or a copyright owner may not want some of the above black-and-white photos to be used for educational purposes here, please contact me for adding credits or deleting the pictures from the article.
My amateur video of the former Flak Towers, which I took in September 2017 in Vienna.
Share
1
22 142Views
5%