Hugh Trevor Roper was born in January 1914 in a small rural village called Glanton, in the very North of England. His father was a local doctor. The future historian had passed education in such well-known local schools as Belhaven Hill School and an old Belhaven Hill School for boys. Hugh Trevor Roper continued his education within Christ Church and Merton College (college of Oxford University). He specialized in Classic Ancient History and succeed in his Bachelor’s degree as a 20-year-old student, who managed to win prestige scholarship. But Hugh Trevor Roper had soon bored with Classics and turned his academic and life interest to History (got his degree in another two years). The first known book, written by Hugh Trevor Roper was a thorough biography of William Laud, Archbishop of the XVII century.

During the Second World War Hugh Trevor Roper was an officer in the Radio Security Service – of the department of MI6 Intelligence Service. After a while, he was transferred to a team, which was responsible for the interception and decrypting of German Intelligence messages (Abwehr). In 1940 this team of officers succeeded with a massive of intercepted data, which, among the other obstacles, influenced secret decrypting within Bletchley Park. Hugh Trevor Roper, as a young and perspective officer, already had a vision, that old and skilled servants of the Intelligence Service were now unable to face the new War and its changes – in contrast with young motivated officers of a new generation, like himself.

From 1945 to 1946 Hugh Trevor Roper was appointed to lead a research group of Britain officers and was ordered to reveal the exact facts and details of Hitler’s last days, former German chancellor and dictator of the Third Reich. This assignment of great political importance then become a basis for the well-known book, called “The Last Days of Hitler” by Hugh Trevor Roper. The author engaged himself in the upcoming Cold War and expressed enthusiasm for the struggle against Communism – he then became of the founders of Encounter magazine, once well-known in England. He continued to research and write academic works on History with a particular passion for the History of England in the XVI-XVII centuries. Hugh Trevor Roper never escaped debates on the approaches of Historical research, which sometimes resulted in conflicts with his colleagues.

Hugh Trevor Roper is extremely recognizable for his studies on the Second World War and Third Reich in particular with two major and mostly discussed books: Hitler table talks and The last days of Hitler. Some of his statements were deeply criticized among historians, but HT Trevor-Roper did not stand back from academic disputes with other established historians of WW2. He criticized the somewhere piercing sarcasm of Alan Bullock and Taylor A.J.P., who claimed Adolf Hitler to be a charlatan. Hugh Trevor Roper considered the German leader as a kind of visionary and mastermind. By the way, a historian himself was claimed for ignoring the Holocaust in his own works and even for hidden anti-Semitism.

In 1980 Hugh Trevor Roper, an author of ‘The last days of Hitler’ book was appointed as a Master of Peterhouse – a small college under the patronage of Oxford University. After seven years on this job, a seventy-year-old professor resigned, claiming this period was a waste of time. In 1983 he was among the other researchers who claimed the so-called “Hitler diaries” to be faithful. These “documents” were then proven to be a fraud. This event cast an imputation on the character of a famous historian, but his studies and books are still well-known and considered authoritative. Hugh Trevor Roper passed away in 2003 from a combination of age and cancer.

THE LAST DAYS OF HITLER BOOK

In the Autumn of 1945, four months after the German unconditional surrender and death of Adolf Hitler, the world press and even military circles were discussing a variety of versions of how Adolf Hitler had met his death if he did at all. Tabloids revealed multiple crazy rumors from the rumors that the former German leader was hidden by the Allies to his calm rural life in Albania, Spain, or Argentina where he had managed to escape using U-boat. In his The last days of Hitler book, Hugh Trevor Roper highlighted and emphasized two main reasons why Britain’s government gave Mi-6 Intelligence to perform thorough research on the issue of Hitler’s last days. The first matter was to eliminate these crazy rumors, circulating all over Europe and false mystifications, an amount of his was increasing progressively each week, hurting the political situation between the Allies. The other reason was to solve a dispute with the Soviet Union, which claimed Allies to conceal Adolf Hitler alive. Along with that, USSR had access to the site of former Hitler’s bunker, even to burned remains and all main eyewitnesses.

Hugh Trevor Roper emphasizes all the privileges he and his team received on behalf of Britain government and Intelligence Service to find out all possible facts and truth on the last days of Adolf Hitler. He had access to all parts of the territory occupied by American-British forces, as well as to the witnesses (both in POW camps and civil), who captured German documents. Hugh Trevor Roper could claim any assistance in his investigation, even of France. The main obstacle to the issue of revealing all the facts and circumstances was the opposition antagonism of the Soviet Union. So-called allies now ignored official requests to provide access to the notebooks of Hitler’s war adjutants, which had been previously mentioned to exist by Marshal Georgy Zhukov. The Soviet party also ignored the claim to get an arrangement with several important eyewitnesses of the last days of Hitler, such as Hans Bauer, the fuhrer’s pilot. Possible valuable findings in Bunker were also concealed. 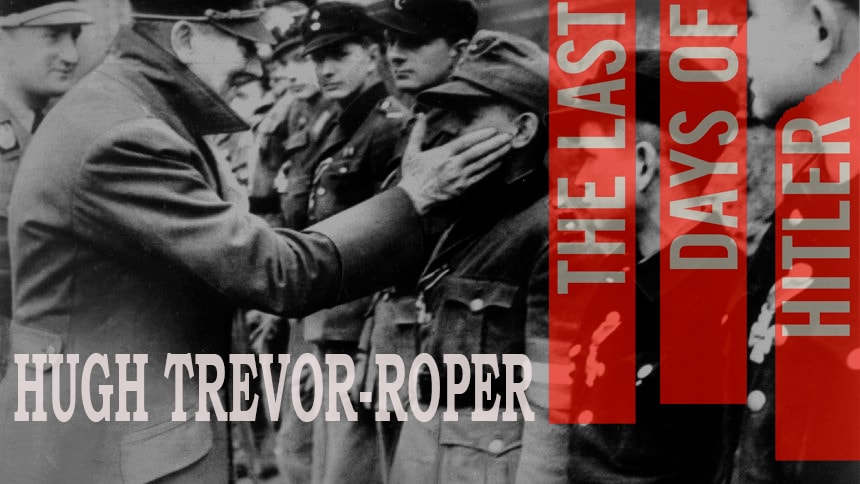 The first version of Hugh Trevor Roper’s official report was revealed on November 1, 1945, after a two-month investigation. At the same time, most of it was given to the public press. In his The last days of Hitler book, Hugh Trevor Roper notes that the conclusions of the report were admitted questionable as a divisive issue. On the one hand the Soviet Union now openly ignored the obvious facts, while declaring Stalin’s paranoiac concept that Hitler is alive. On the other – disputers and conspiracy theorists could not agree with a definite answer and actual version, that Hitler was dead and his body had been burned in a bomb pitch with gasoline. A period after the publication of the report witnessed the revealing of some other authentic documents (such as Hitler’s last will) and witnesses from the bunker on Hitler’s last days.

After a short vacation, Hugh Trevor Roper accepted an allowance to take the report as a basis for the future book, taking into account new findings. Generally, ‘The last days of Hitler’ book was finished already in the Summer of 1946 and included updated and new data, which had not modified the main claims and concepts of the initial investigation (which had already become an official Britain version on the issue), taken in 1945. The first edition of the book, called The last days of Hitler came out in 1947, and since that has been translated into more than twenty languages and stood the test of time with multiple editions. The first author’s reprint, moderated by Hugh Trevor Roper himself, was published in 1950. Historian claims that he did poor changes in the original text, just adding new testimonies and documents, supporting initial conclusions. Even with the access to Germans POWs, who had come back home within the 1950-s, the last English reedition preserved the original.

KEY PERSONALITIES AND WITNESSES IN THE BOOK

In one of his book’s affixations, Hugh Trevor Roper stated 42 personalities, which form the story of his The last days of Hitler. Some of them were rarely mentioned once or a few times. Other testimonies play an important role in revealing the historical truth. Seven important witnesses were interviewed between September and November 1945 by Hugh Trevor Roper himself. Testimonies of others are reachable by employing memoirs (while alive or posthumous, after releasing from determination) or interviews. Few of these personalities had become figurants of the Nuremberg trial and had given multiple testimonies on the events of the Spring of 1945 and the last days of Hitler. 21 of these 42 witnesses within the book were directly connected with the events between April 22 and May 1, 1945. In the list below I will give “top-10” personalities, based on the number of mentions within the text. Therewith, some of the non-so-mentioned personalities were more important to the investigation, rather than such ones as Albert Speer, Heinrich Himmler, or Walter Schellenberg.

It’s important to emphasize that the titles of chapters within Hugh Trevor Roper’s ‘The last days of Hitler’ book sometimes do not correspond to the content and have some linear structure. Within his first three chapters, Hugh Trevor Roper pays attention to the main sources of investigation, evaluates the most sophisticated conspiracy theories on Hitler’s last days and Adolf Hitler’s death, and highlights the political environment and situation on opposite sides of the barricades and circumstances, which led Hitler to the Bunker in Berlin. The main issues of Chapter 4 are a) Hitler’s 56 birthday b) the massive exodus on April 22 c) Hitler’s decision to deny command and then to take it back as a supreme commander. Then Hugh Trevor Roper shifts focus to particular personalities of the Third Reich inner circle, such as Hermann Goering and Heinrich Himmler. Chapter 7, which is called “Death of Hitler” resumes all the facts, testimonies, and conclusions of the investigation of what had happened to Hitler and his body. Those who enjoyed the “Der Untergang” movie (2004) would appreciate this part of Hugh Trevor Roper’s ‘The last days of Hitler’ book, also because of the constant mentions of Traudl Junge, former Hitler’s secretary. 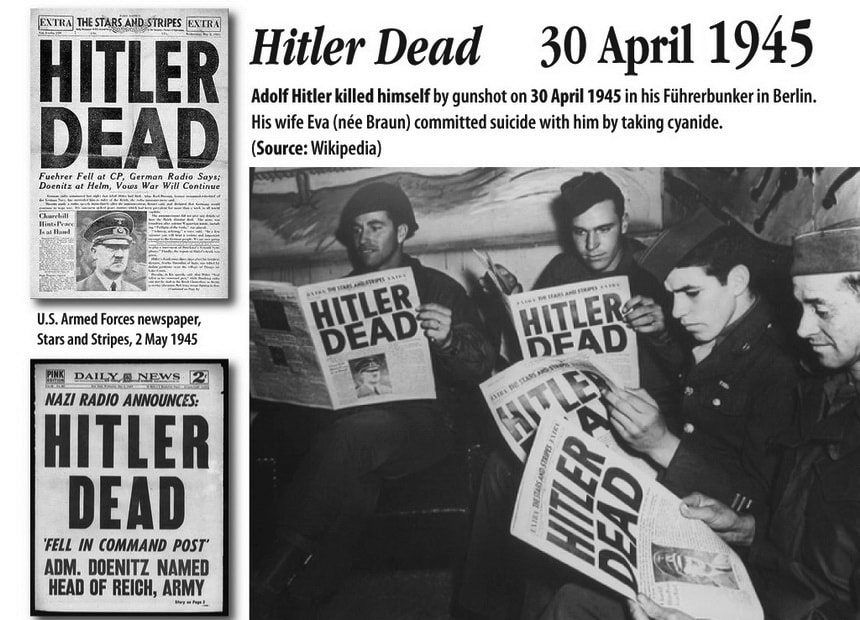