Anschluss of Austria. Annexation in 1938

On March 11, 1938, after the Government of Austria had to accept the German ultimatum and resigned under the constant international and military pressure, Kurt Schuschnigg, Prime Minister performed a radio speech to the nation. He declared resignation of the Austrian Government and devolution of the authority to Arthur Seyss-Inquart, the under-Nazi candidate. Schuschnigg also appealed to the army not to make resistance to the German army, crossing the border. On the same day, the president had also been pressured to accept the resignation of the government and agreed for a new chancellor. The newly created puppet government of Austria made an official appeal to  Germany and asked military forces to enter the state to maintain order and peace. Even Seyss-Inquart was not aware of this document until the next day. 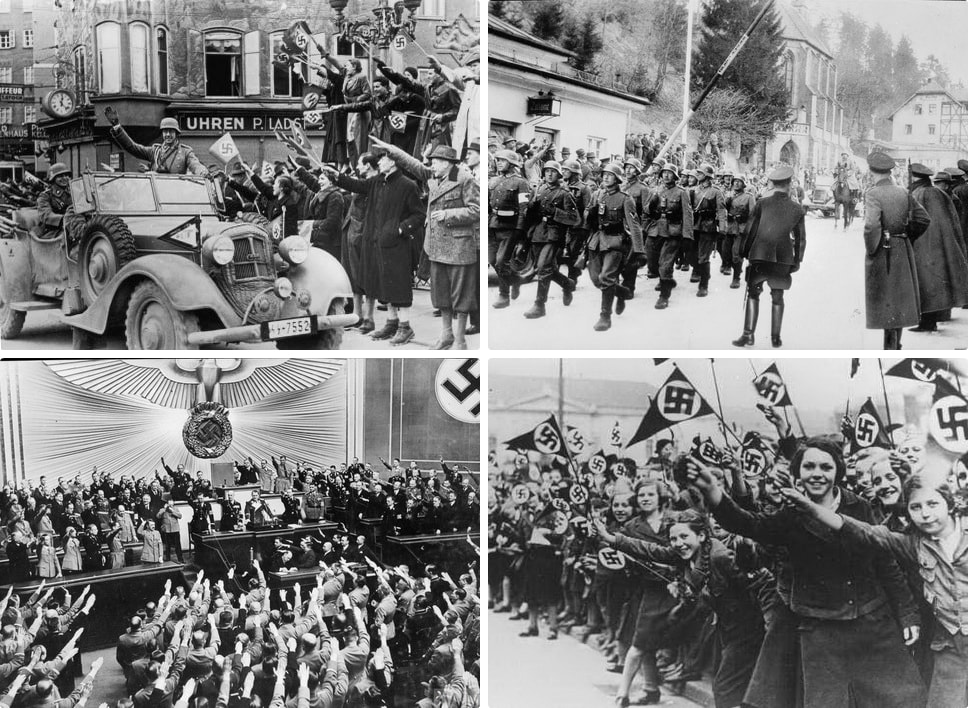 In the early hours of March 12, 1938, German Wehrmacht crossed the international border with Austria according to military plan, aimed to perform annexation regardless of the inner processes in Austria or any permission. The Austrian army has not made any resistance to the invasion. Heinrich Himmler was the first highly-ranked German official, who came to Vienna with his SS surroundings in the early hours of March 12. Adolf Hitler arrived in Vienna on the evening, March 13, 1938, and the day after he was received with open arms with crowds of people. Within the next few days, the Nazis organized a number of events, including public appearances of Hitler, who announced Austria to be a part of the Third Reich.

I’ve visited Vienna in September 2017 and examined all the main sites, which were deeply involved in the events of March 1938 and after-period. 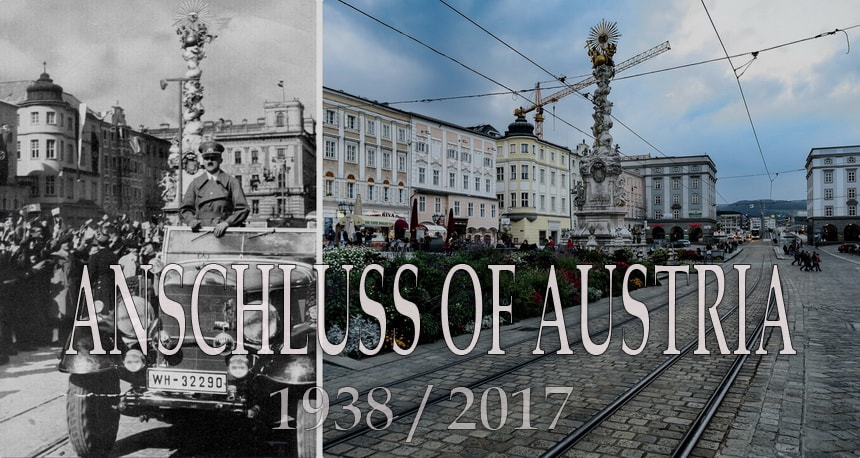 On March 11, 1938, Austrian Nazis had finally taken action on the public just after the resignation of the government and the Prime Minister’s statement on the radio. They put Swastika on the balcony of the Austrian Chancellery building, located within Ballhausplatz. The Nazi flag was planted over the main entrance and had become the first Nazi symbol put on the office building in Austria. The front part of the building with a former chancellor (Schuschnigg) was also decorated with a banner: DURCH KAMPF ZUM ZIEG  (»Through Struggle to Victory»).

The building on Ballhausplatz was a residence of the puppet government, with Seyss-Inquart on-paper Chancellor, up to it had been liquidated on April 30, 1939. Then the Nazi administration took control over the building and maintained until the end of the war. The construction was seriously damaged as a result of the aircraft bombing in spring 1945 and has been rebuilt in 1950. We now see poor differences, comparing photos taken in 1938 and the modern view.

After the Anschluss of Austria, several buildings in Vienna were decorated with the Nazi symbols and banners with slogans. Loos Haus on Michaelerplatz 3, named after its creator, was among the first ones to demonstrate the new order. A piece of cloth stated: GLEICHES BLUT GEHORT IN EIN GEMEINSAMES REICH – »Same blood in combined Reich’‘. It meant the significance of the reunion between the German Reich and Austria as the historical nation of Aryan blood.

Loos House has suffered bombing in 1944 and was renewed after the war. At one point it included a furniture store and in 1987 Raiffeisenbank has bought the famous construction and the bank is still here. The front side of the building with columns varied only slightly from 1938.

On March 15, 1938, two days after the Anschluss of Austria, the Nazis organized several celebrations within the streets of Vienna. Surely the most important and famous was a speech by Adolf Hitler, declared from the balcony of HOFBURG, a former Habsburg palace. Crowds of people filled the near Heldenplatz (Square of Heroes). A few hundreds of thousands of Austrians bridged the gap of the square and some of them even climbed on two famous monuments — Prinz Eugen and Archduke Karl. Hitler declared a pompous speech on the future of German Reich and Austria – his motherland.

On March 15-16, 1938 German troops and the SS formations participated in a number of military parades within the streets of Vienna. In particular, along the Ringstrasse, the heart of the capital, which was a place of passionate interest of a young Adolf Hitler in 1906-1913.

Military units of the Austrian army, which had given their loyalty oath after the Anschluss of Austria, paraded in front of the Parliament of Austria, a place, where young Adolf Hitler had received his early understanding of democracy and its “weakness”.

On March 16, 1938, units of the newly formed Austrian SS paraded the Heldenplatz, near the Hofburg Palace, a day after a historic speech given by Adolf Hitler.

On the same day, March 15, 1938, Adolf Hitler took part in another important ceremonial event, just next to the Heldenplatz and Hofburg Palace. Hitler tributed flowers to the Austrian War Monument, devoted to the First World War (Great War at that time)

A month after the Anschluss of Austria (Annexation of Austria in March 1938), Adolf Hitler returned to Vienna to congratulate the voting of the Austrian people for the Anschluss. On April 9, a day before 99.75% of electors had voted for the joining to Germany, Adolf Hitler took part in a massive pompous military parade – his motorcade moved along the streets of Vienna. The most triumph part of the ceremony was a motorcade way from the Burgtheater to the City Hall (Apr. 200 meters). Hitler was ceremonially welcomed by the Austrian nationalists and he gave a burning speech inside the City Hall, devoted to past and expected events. 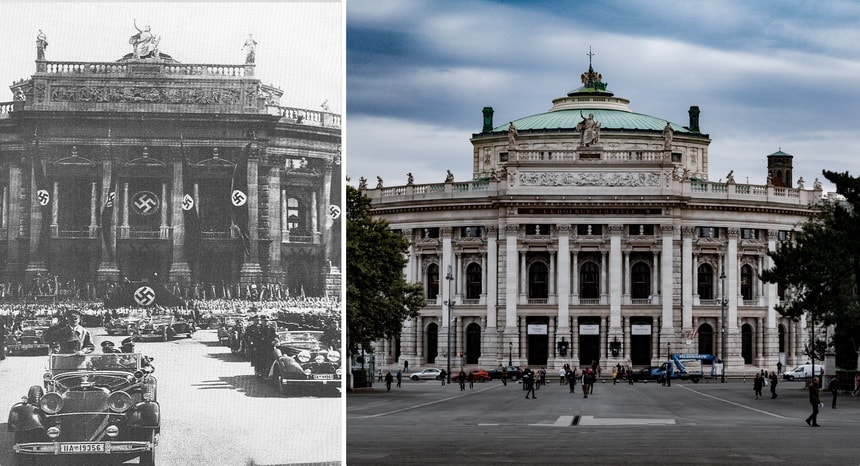 During his visit to Vienna in March 1938, Adolf Hitler was a resident of the Hotel Imperial, located in the heart of a city on Kartner Ring 16. Hitler and his attendants accommodated within a small apartment on the first floor, but the famous photoshoots we know, describe the Fuhrer on the balcony on the second floor on March 14 and 20. One appearance presents Joseph Goebbels and another one, Heinrich Himmler just next to the German chancellor. Hitler also took an apartment in the Imperial Hotel during his second official visit in April (devoted to the plebiscite). After the war, the Hotel imperial was taken and roomed by the Soviet occupation troops. It is still a gorgeous and privileged place to stay in Vienna. For decades it welcomed a number of VIP guests: John Kennedy, Nikita Nikita Khrushchev, Richard Nixon, Queen Elizabeth II, and others.

Hitler in Belvedere in 1941

On March 1, 1941, Adolf Hitler was present within the signing ceremony between Bulgaria and Axis powers, which officially agreed to join the Tripartite Pact. Representatives of Japan and Italy were also present and gave their signatures, as opposed to Hitler being just the highest guest and observant. This ceremony took place in a gorgeous Belvedere palace that has varied poor from 1941.

Adolf Hitler performed his magnifical entering Austria on March 12, 1938, to journey along the country and visit places of his childhood and youth. His motorcade moved from West to the East and visited a number of cities, before reaching Vienna on March 13. After visiting Braunau am Inn – a city where he was born, Adolf Hitler moved to the Linz. German Chancellor spent his childhood from 1899 until 1907 in Linz and his parents were buried within a cemetery in Leonding (a suburb of Linz). After Leonding, Hitler entered Linz and was welcomed with the crowds of people, who supported the Anschluss of Austria. 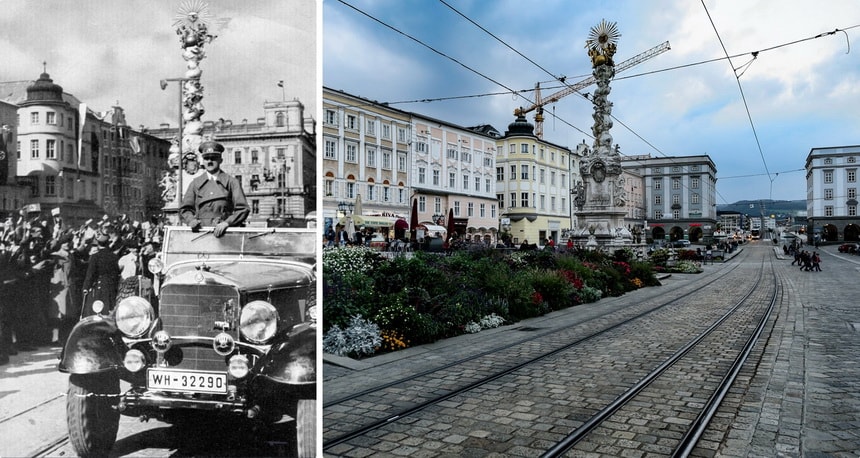 Hitler’s motorcade moved through the Hauptplatz, the main square, which was renamed to Adolf-Hitler-Platz (Square of Adolf Hitler) on the same evening. Thousands of citizens came to greet the German chancellor. A month after, On April 20, 1938 city administration organized pompous celebrating of the 49-s birthday of Adolf Hitler, which mainly took place within the main square.

In the late hours of the same March 12, 1938, Hitler has his passionate speech from the tiny balcony of the Linz City Hall. He proclaimed the reunion of Austria and Germany to form an empire for centuries. The main square was crowded with thousands of people, who wanted to see Hitler and some of them even climbed the local statue, created in 1723 to have a better perspective of the event and the main guest.

After the Anschluss of Austria in March 1938, Hitler’s motorcade entered Linz and moved to the Hauptlatz using a bridge, which did not satisfy Hitler. German leader had grandiose plans for Linz – he even planned to meet his last years here after all victories and accomplishing his historical mission. The old bridge was exploded and the Nazis built a new one, called Nibelungbrucke.

Nibelungbrucke bridge remained almost unchanged as the reminding of the Nazi past after the Anschluss. After the war, a new administration demolished two statues of Siegfried and Kriemhild.